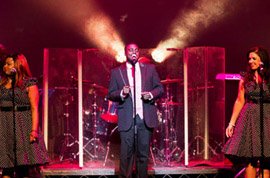 Michael Williams of The Drifters is to join the cast of Unforgettable for this year’s tour. Due to personal family issues Daniel Bowen Smith of the line up has had to withdraw to spend more time with his family.

Michael has been a member of the legitimate line up for ten years and is delighted to be joining the cast of Unforgettable between The Drifters Rebranded World Tour Dates 2015.

You can see this night of pure magical entertainment. Featuring songs from some of the world’s greatest recording artists. Highlighting some of the legendary musical icons of all time including Franki Valli, Elvis Presley, The Supremes, Marvin Gaye, the Carpenters, The Beatles, The Everley Brothers and the Drifters and many more…

Alongside Michael Williams the show features Jerome Bucknor the current Drifters understudy with a west end cast and the Drifters band. This exhilarating and exciting concert is set to thrill and features a musical trip through time from the days of early Rock n Roll through to the Motown period. Top class vocal renditions of some of the best songs ever recorded. This fast moving and impactful show features two hours of sheer vocal brilliance with back-to-back hits from these decades.

The first two entries drawn in our exclusive competition will win a pair of tickets to the show on Thursday 29th October, 7.30pm.

To enter please answer this simple question: Which is the night in question in this song, “_______ Night At The Movies”?

Send your answer by email to hello@bouncemagazine.co.uk with your answer, name, address and daytime phone number. Closing date: 23-10-15.