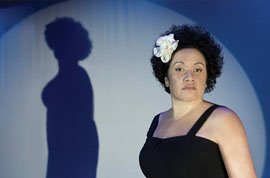 Win! Tickets to see ‘At Last – The Etta James Story’…

Win tickets to this amazing performance…

This smash-hit narrative concert tells the story of soul legend Etta James’ turbulent life and features some of her most beloved songs.

During a long and tumultuous career that saw her win six Grammy Awards and a star on The Hollywood Walk of Fame, Etta James has influenced a vast array of artists from Diana Ross, Janis Joplin, Stevie Wonder, The Rolling Stones and Rod Stewart, and is acknowledged as inspiring the careers of a new generation of singers from Christina Aguilera, Adele and the late Amy Winehouse.

Sadly, Etta’s frantic recording and touring schedule coincided with her ever-growing addiction problems and over time, she not only sang the blues… she lived the blues. Mercifully, her passion for life and strength of character saw her conquer her demons and she continued to record and perform into her seventies.

You should email your answer to hello@bouncemagazine.co.uk before 31-03-17, making sure that you state your full name and address in the email.