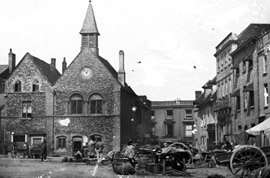 No matter from which viewpoint on the Cornhill, shoppers cannot but notice one of the grandest buildings in the town centre – that of the Market Cross. Yet, its very elegance and use today belies a much humbler origin.

Such buildings originated from wayside, Celtic stone crosses. In the early medieval period these crosses began to appear in market places where they were used for preaching or the issue of public proclamations as well as to imply fairness in market transactions.

That a stone (market) cross existed in Bury St Edmunds is certain, although its exact location is unknown and the present site of the Market Cross is unlikely to be its original location. In latter times, the highest point of the market was often selected, which is true of today’s Market Cross location. However, what is certain is that a stone cross existed in the market in 1583, as the stones were sold for £2 by the Guildhall Feoffees, helping to raise funds to build a wooden shelter for the corn sellers.

This wooden edifice only survived until the disastrous fire of April 1608.  By 1620 the Market Cross had been rebuilt on its original site. The building

in England, indeed, later, it doubled up as the town’s Playhouse. Interestingly

limestone, later to encase the whole building, leaving the ground floor open to corn dealers and 2 shops at the north end.

By the early 1800s the Cross had become too small and a new theatre was built and opened in 1819 (now the Theatre Royal) with a replacement corn exchange in use by 1836 (now Harriet’s). Further renovation was necessary following a fire in 1880.

The 20th century was somewhat chequered for this building with use as Town Hall but often empty; by 1968 more plans were made, this time to restore the building to Adam’s original design with the ground floor re-opened as before, but this was only partly implemented. In 1971 the Town Hall label was dropped in favour of the traditional Market Cross, and by 1972 the Art Gallery had taken up residence. Thankfully, the building is still in use today.

Fancy looking round the town a bit more? Just visit the Tourist Information Centre on Angel Hill (01284 764667) and find out more!