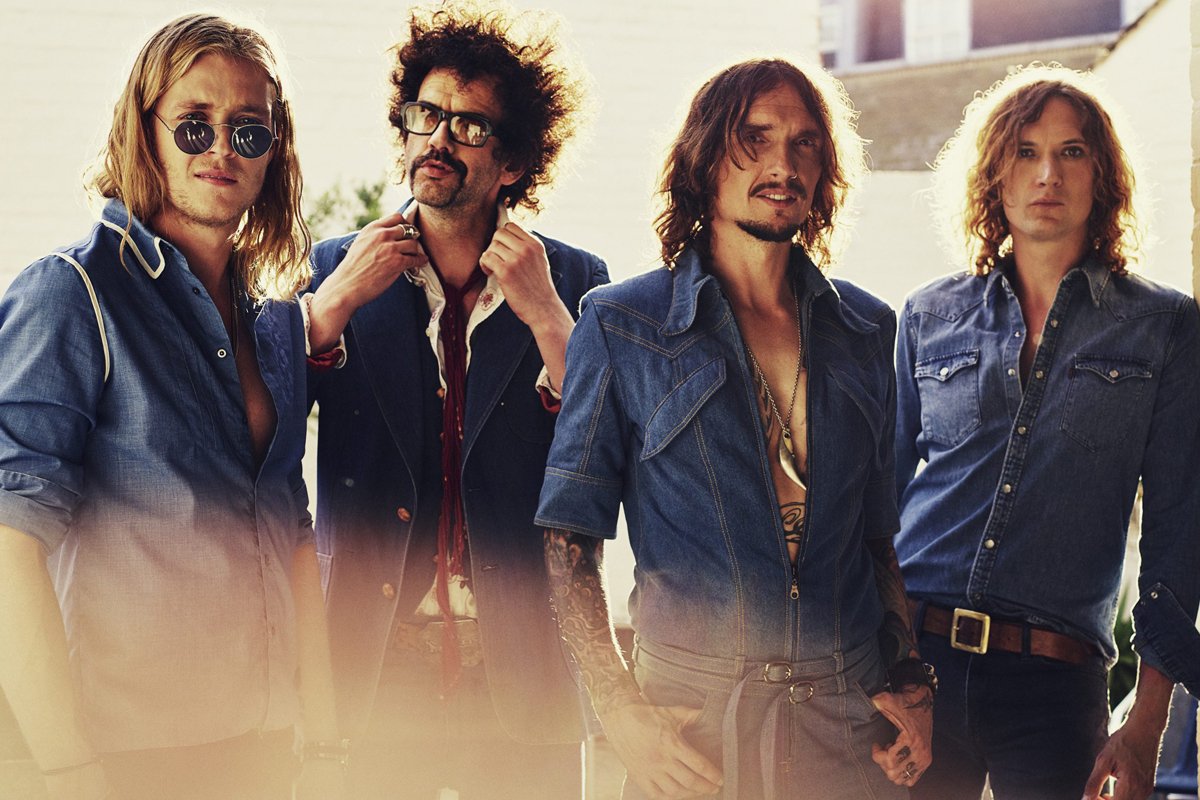 The Darkness are back!

Rachel Ducker speaks exclusively to Dan Hawkins about growing up in Suffolk, his career to date and the bands new album and tour…

2003 gave birth to one of the most extraordinary and best loved bands in the UK. The Darkness released their debut album Permission To Land to overnight success, topping the UK charts, going 5x Platinum and selling over 1.5 MILLION copies in the UK alone.

It spawned a series of hit singles including ‘I Believe In A Thing Called Love’, ‘Growing On Me’, ‘Get Your Hands Off My Woman’ and ‘Love Is Only A Feeling’. It clocked up a series of awards including three BRIT Awards, two Kerrang Awards and an Ivor Novello for ‘Songwriters Of The Year’ amongst many others.

The band then built upon the success of their debut with their 2005 follow up One Way Ticket To Hell… And Back, which produced the Top 10 hit ‘One Way Ticket’. In 2006 Justin Hawkins left the band, checking into rehab and The Darkness fell apart. Following successful treatment, the band reformed in 2011 touring Europe and South America in 2012 with Lady Gaga. They released their comeback album Hot Cakes that year and Last Of Our Kind in 2015.

The band have now returned in 2017 with Pinewood Smile, their first album to come through Cooking Vinyl. Ahead of the album’s announcement, The Darkness toured Europe in support of Guns N’ Roses and are playing a number of festivals in the UK and Europe during the summer.

Rachel Ducker speaks to the Lowestoft lad Dan Hawkins about their rise to fame and new album due for release soon.

R: Dan, great to speak to you this morning, how are you?

I’m good thanks Rachel how are you?

R: Very well thanks, I am going to fire straight into the questions if that’s ok?

Yeah go for it!

R: Now, firstly, I wanted to touch upon the fact you are a Lowestoft Lad…

R: So, I wanted to know if those days of being a student at Kirkley High School seem like a distant memory to you?

(Laughs) – I still remember it vividly. I had a good time at Kirkley. I had some really good teachers there and it was pretty good fun, but yeah, it does seem like a very long time ago now.

R: Well, it’s great to have the opportunity to speak to someone who came from Suffolk and has gone on to do so well.

You know, it’s amazing the amount of East Anglian’s we meet around the world, and how many are doing so well in the music industry.

R: There must be something in the water I think?

There is! Or maybe that inherent need to get out and do something!

R: So whilst growing up how did you get into music?

My parents were really into music, we played a lot of Bowie, T-Rex, Blondie and Queen, so that’s where the initial love came from, but when I went to Pakefield Middle School they had a music cupboard there, with drums and that sort of thing. I was the only one who ever really wanted to go in there.

R: So whilst growing up how did you get into music?

My parents were really into music, we played a lot of Bowie, T-Rex, Blondie and Queen, so that’s where the initial love came from, but when I went to Pakefield Middle School they had a music cupboard there, with drums and that sort of thing. I was the only one who ever really wanted to go in there.

R: I remember those cupboards at my school and you were only allowed in at certain times?

They almost like, starve you of it, which makes you even more hungry to get in there, you know. I was a drummer initially and I just loved drums and drum kits and well, making a load of noise I suppose. I ended up being the drummer for the school orchestra.

R: So that’s where it all started?

Yeah, I played with a lot of older kids, and played shows at churches and things like that

R: Before you formed The Darkness, you where in a couple of other bands too?

As any musician will testify, you’re always in a band and sometimes you’re even in three. You’re always hedging you’re bets and you’re always trying to improve the band and you’ll jump ship then play with another band, so I must have been in nearly ten bands when I was in Lowestoft, and that didn’t really change when I moved to London. I think it’s a thing that generally happens, until you find your perfect mix.

R: The Darkness formed in the year 2000, tell us more about your journey and how did you reach commercial success?

The band just prior to The Darkness was called Empire, Justin was the keyboard player and back up guitarist, and we had a singer who had a pretty good voice, but basically had stage fright and couldn’t deal with talking to an audience, so he was a little bit unlikable in one sense? 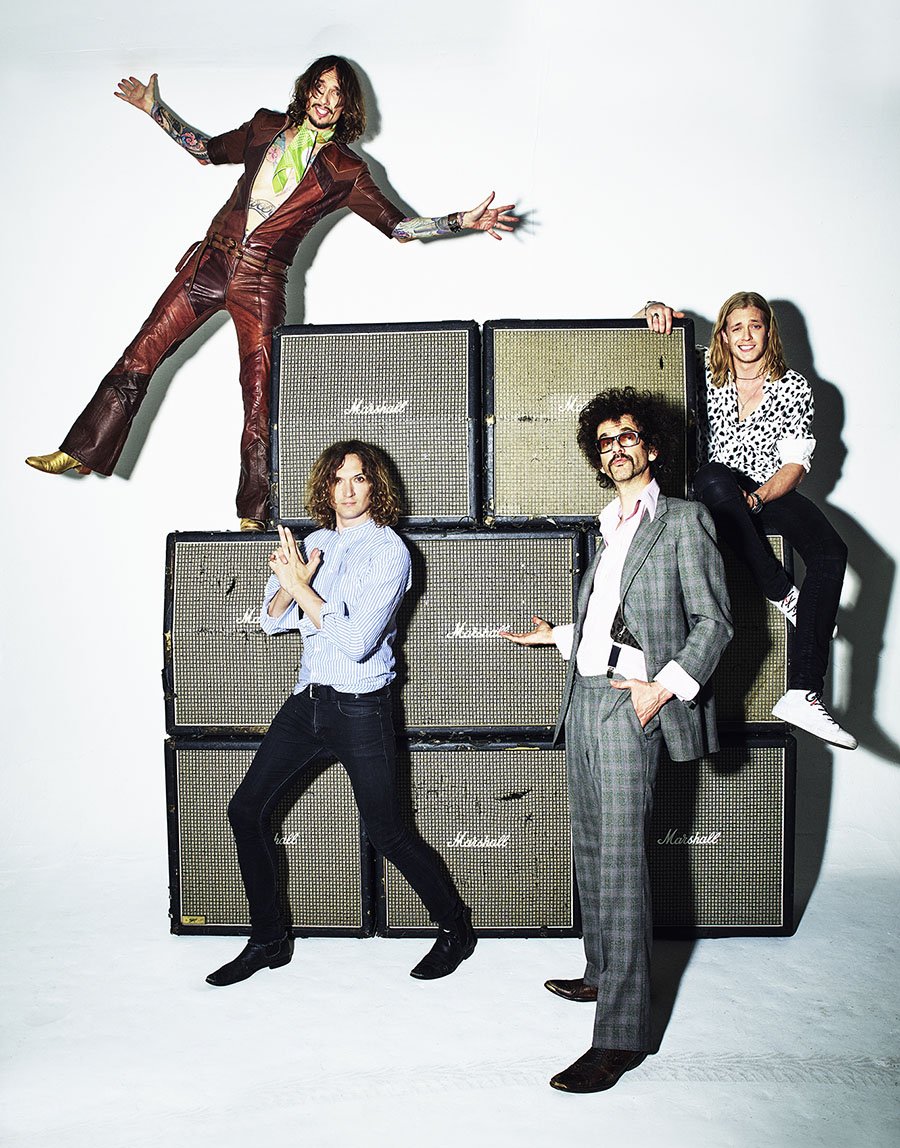 R: Not great if you’re a front man?

Yeah, I know, so my brother was doing all of the showman bits, we’d finish a song, the singer would go and have a drink of water and would try so hard not to even look at the audience, and then my brother would be there chatting away to the crowd, so he was doing the front man bit without the singing.

So we basically fired the singer, but the rest of the band got on so well, we stuck it out and auditioned singers for about two years, and my friends will never let me live it down that Justin was there in the band the whole time.

He never showed any interested in being a singer and I can’t really remember how we ended up there? It was more like, “you just sing if its not terrible that’s great and if not we’ll just end up as the worst Queen cover band ever”! So luckily it hasn’t come to that yet.

R: Which is good news! [laughs] – So am I right in thinking you have some kind of connection with the Gillingham Swan?

Well my aunty used to own the Gillingham Swan, in fact, my cousin John now does, so we used to spend a lot of time there. We actually formed the band in that pub, on millennium eve. My brother and I were dancing about to Bohemian Rhapsody and we still didn’t know we could sing at that point! So we do have a connection with that pub, although we’ve never actually played there.

R: Right, so would you ever consider going there for a secret gig?

Oh maybe, maybe one day! John is an awesome guy, he’s doing a great job there and is putting on stuff like outdoor events. I could maybe imagine doing something outdoors there, I certainly wouldn’t write it out.

R: In the early days you drew inspiration from your local surroundings in songs such as ‘Black Shuck’ the mysterious beast who roamed Blythburgh, was there a reason for this? Where you trying to create a connection to your local roots?

Some of the advice you get from your peers when you’re starting out is to write about what you know, so my brother took that literally… he also wrote about the Tollund Man, and we are in the process of writing a song about Sutton Hoo.

R: Oh an exclusive right there!

Yeah, hopefully it will appear on the next album. I am quite drawn to all of that medieval sort of ghostly folk law, East Anglia is an amazing place historically; so many battles were fought, perfect for turning into hard rock songs.

R: Now the ‘C’ word is just around the corner, and by that I mean Christmas, what was it like to have a Christmas hit that will be played for years to come?

Well, yeah, its pretty nice… it keeps the pool heated, you know [laughs]. Its fun, the family get excited when I appear on the TV you know, its great I love Christmas and I am not ‘baa humbug’ about it whatsoever. The thing about Christmas is… I am not sure it’s exactly cool to like Christmas?

R: Oh I don’t know, I think it’s very cool to like Christmas!

R: [Laughs] – Now, onto a more serious question what is it like having to compete with your brother Justin’s outfits?

Outfits! Well do you know what… I can’t compete with his outfits; I don’t know if anyone can!

R: Have you ever tried?

Well, I gave it my best shot for the last campaign. I had this bright pink three-piece suit made, with spangled flowers, but I have realised now that it was a silly move. My job is to stand and the back and just knock out riffs really, and leave the other guys to fight over the limelight. 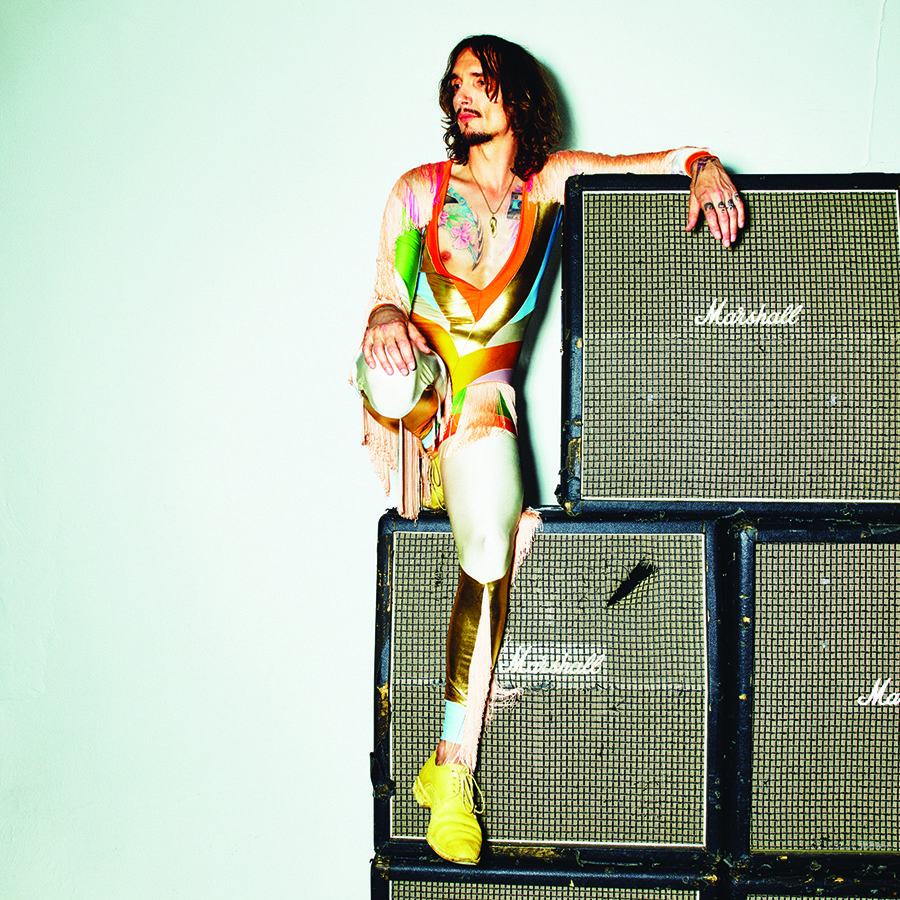 R: The Darkness had some time out, during this time what were you working on and how did the Darkness reform?

Justin went off to do his solo project. I got heavily involved in production and engineering records, its something I’ve always been obsessed by. I also started another band called ‘Stone Gods’. We were just having time away from each other.

R: Which is always healthy I guess when you’ve been in a band together for so long?

Yeah, well it was all a bit intense you see, it was all very life changing and really full on and I think we were trying to keep up with what was happening to us, we lost sight of the important things like um… staying alive [laughs].

R: Your new album ‘Pinewood Smiles’ is now out, for those who haven’t heard it yet what can they expect to hear?

It’s pretty high-energy, uplifting, mega rock I suppose. I’d say it’s The Darkness with full mojo. I think maybe we were scrabbling around trying to find it for a few albums and we’ve found it now, we’ve found the key to it all.

R: You also start your UK and European tour shortly, stopping by us in Norwich, what can we look forward to?

We have an amazing following in East Anglia, it’s always the first show to sell out, which it did within a week at the UEA. We’ve got a lot of new stuff, we’re being really brave and kind of trashing the past to some extent, there will be classics, but there’s new staging, new outfits and a new approach. Expect a great show!

R: You’ve toured with some pretty amazing bands, most recently Guns N’ Roses, is it hard to keep up the momentum when your touring?

We haven’t played with a band yet, I don’t think, that has as much energy on stage as we do. I think that’s our thing. Its nervous energy that’s the thing, it’s the fear of god!

R: And lastly Dan, do you believe in a thing called love?

R: Well, thanks Dan best of luck with the tour!