After nine months of renovation, The Weeping Willow has re-opened its doors to the public. It has been lovingly restored and expanded with vision to create a very modern country pub.

This listed Pub dates from the early 16th century and has been closed for almost three years.

Paula Pryke OBE and husband, Peter Romaniuk, a top architect, have created a family-friendly venue, which includes a private dining room and a public one which can accommodate up to 60 diners, also welcomes dogs and stocks specially selected ales, beers, ciders and fruit cordials, as well as a bar which has been designed to offer ale at one end and Champagne at the other.

Bounce Magazine were delighted to be invited along for diner, here’s what we thought.

“As we walked though the front door, my partners jaw dropped… he couldn’t stop repeating “wow”. 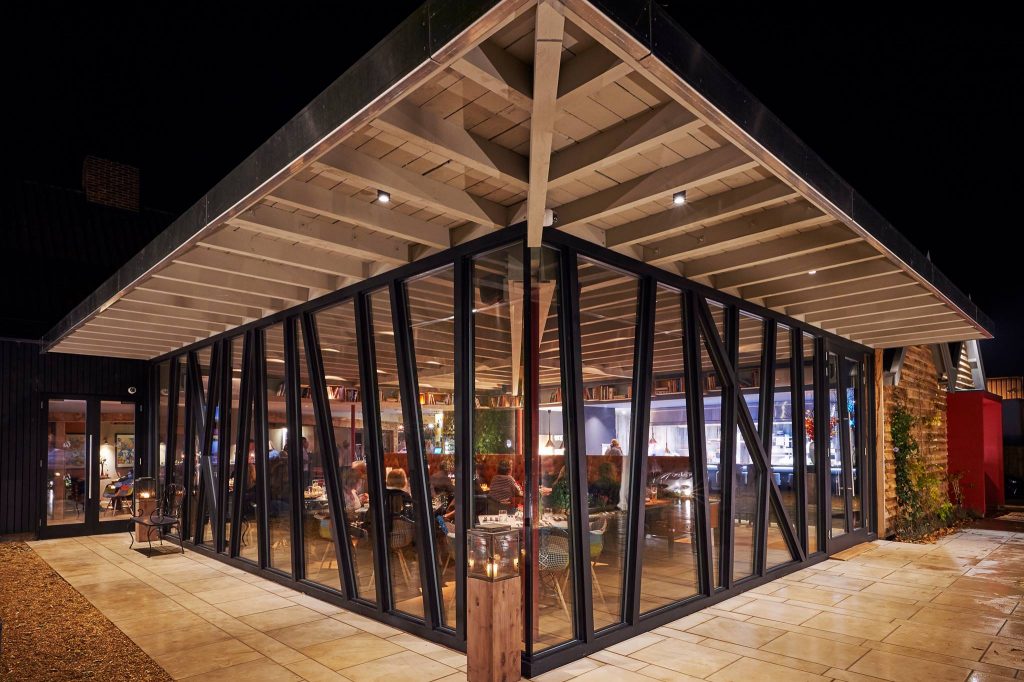 As I nudged him to stop, I then looked up… it was at this point that I realised what all of the fuss was about, this is not your average country pub! 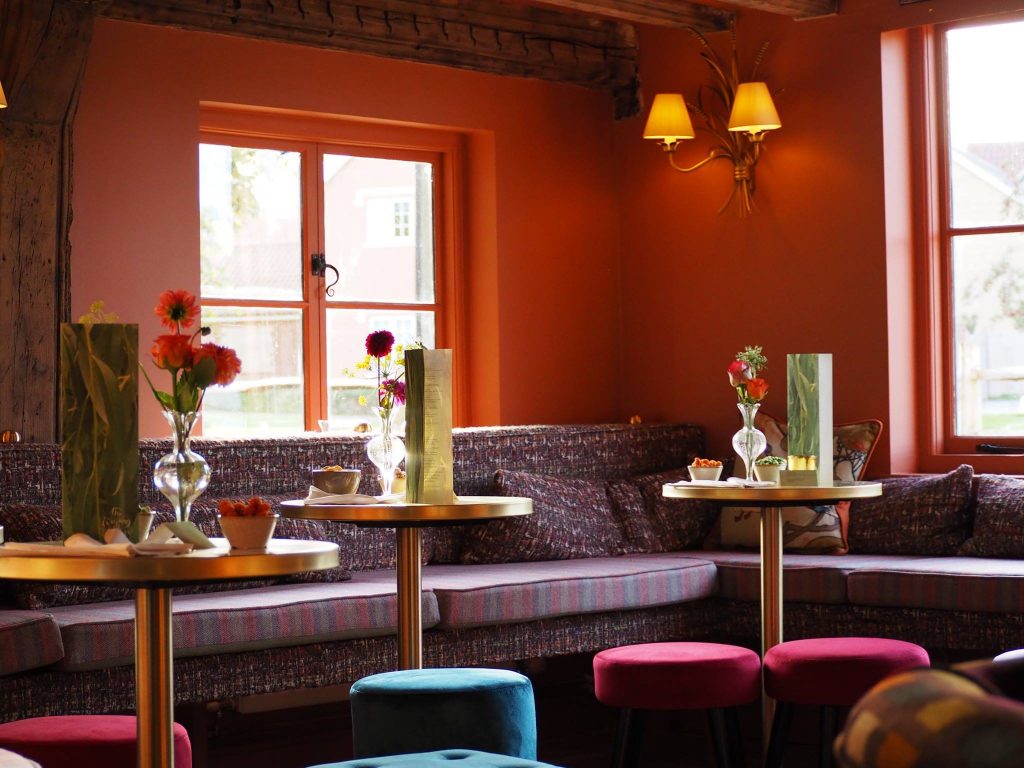 A traditional, yet on trend bar area leads into the wide and airy restaurant, complete with an open kitchen and chefs table, encased within uniquely designed large glass feature windows, presenting the view of a large weeping willow tree outside – lit up- paying homage to the name. 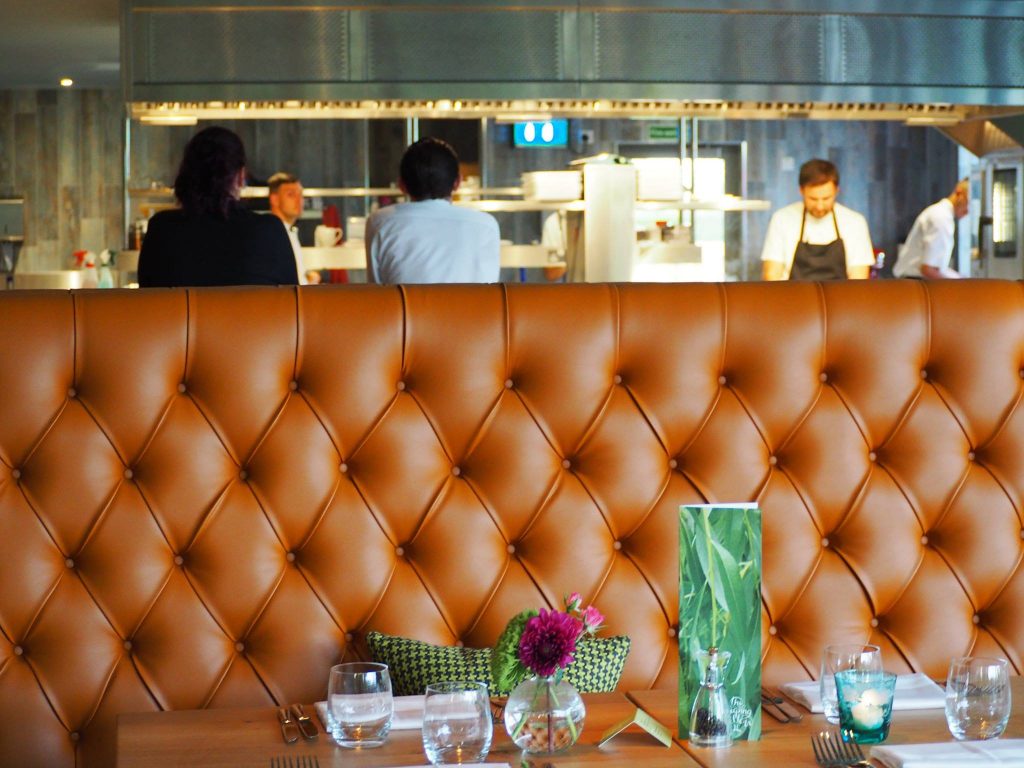 We were warmly greeted by manager Martin Edwards, who has a wealth of experience in hospitality, and after crossing paths with him before, I can tell you he is one of the best maître d’s / managers I have come across, this night was no exception! He gave us the tour of the other areas we couldn’t see, including the raspberry pink private dining room and then led us back to the cosy bar area to try out the house cocktails. 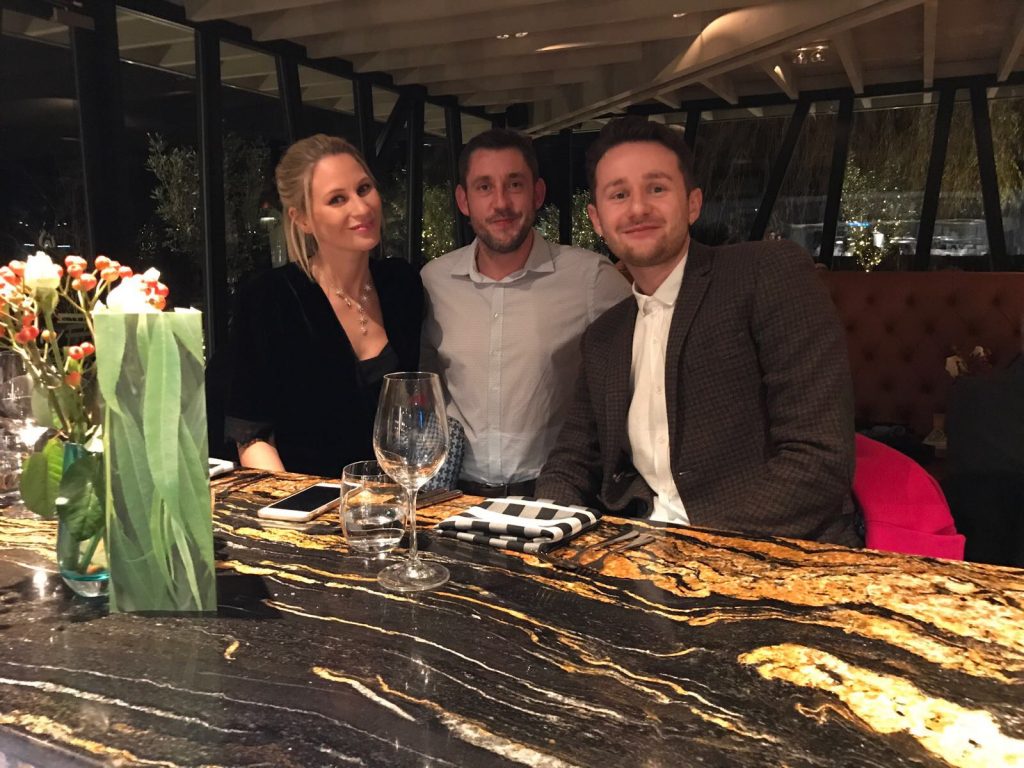 This is usually my favourite part – I couldn’t help but feel a little excited about what was to come!

“As I sipped happily on a ‘Weeping Cosmo’, I selected my choices from the menu”

Newly-appointed head chef Nick Claxton-Webb, who previously worked at The Leaping Hare and Ickworth Hotel, has got this menu spot on. As a pescetarian, it had just as many options available to me as anyone else. It didn’t take me long to choose at all, which is pretty unusual as it normally takes me ages!

Just when I thought it couldn’t get any better, we were led to the chefs table, in the restaurant area, in front of a busy, open, working kitchen. What an experience! 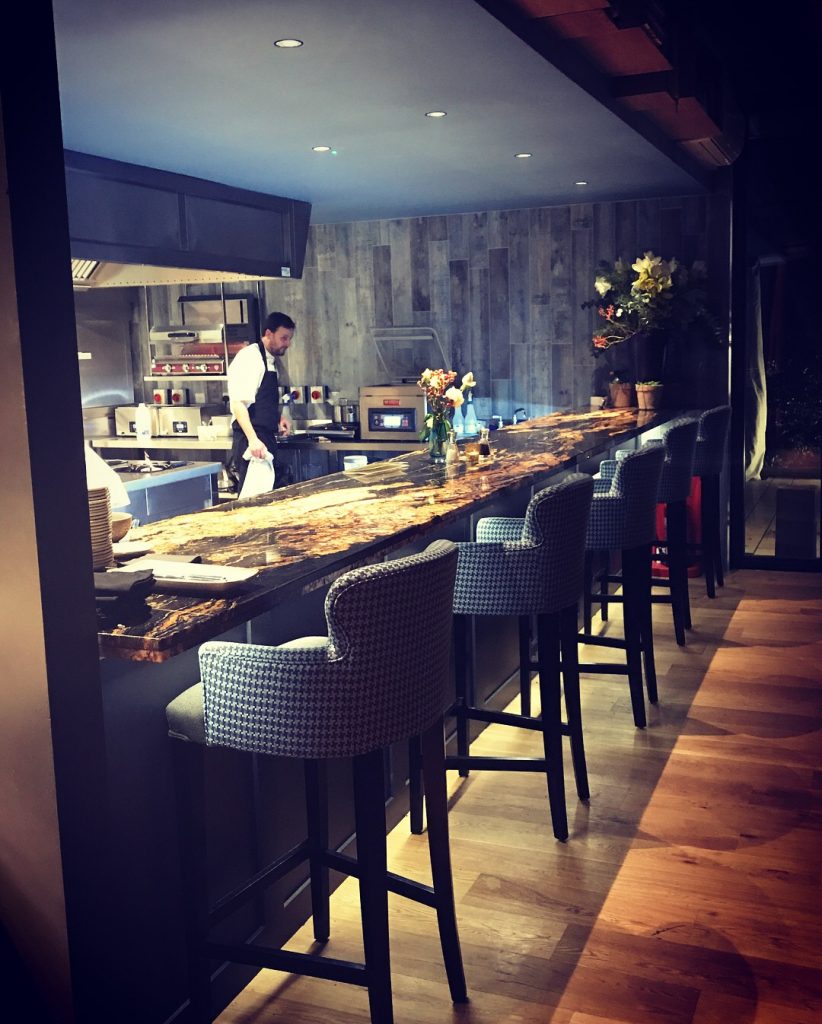 As the gorgeous smells from the kitchen pleasantly drifted over in our direction (changing every few minutes), our starters shortly arrived and were delivered to us by the chefs themselves. I selected the ‘Honey Roasted Fig with red onion marmalade, winter rocket, artichokes, tonka bean granola and toasted pumpkin seeds’.

The figs were sweet and tender, which cut through the acidity of the red onion marmalade, and the crunch of the pumpkin seeds and tonka bean granola added texture and depth. I loved this starter, but even so, I wanted to try some of Sam’s. He went for the ‘Truffle Scented Feta Panna Cotta with olives, balsamic and red onion’. After stealing a bite, I was surprised and intrigued at the same time. I am not a huge cheese lover – especially feta – but I absolutely loved the creaminess and flavour of the Panna Cotta, the truffle really gave this a much richer taste. 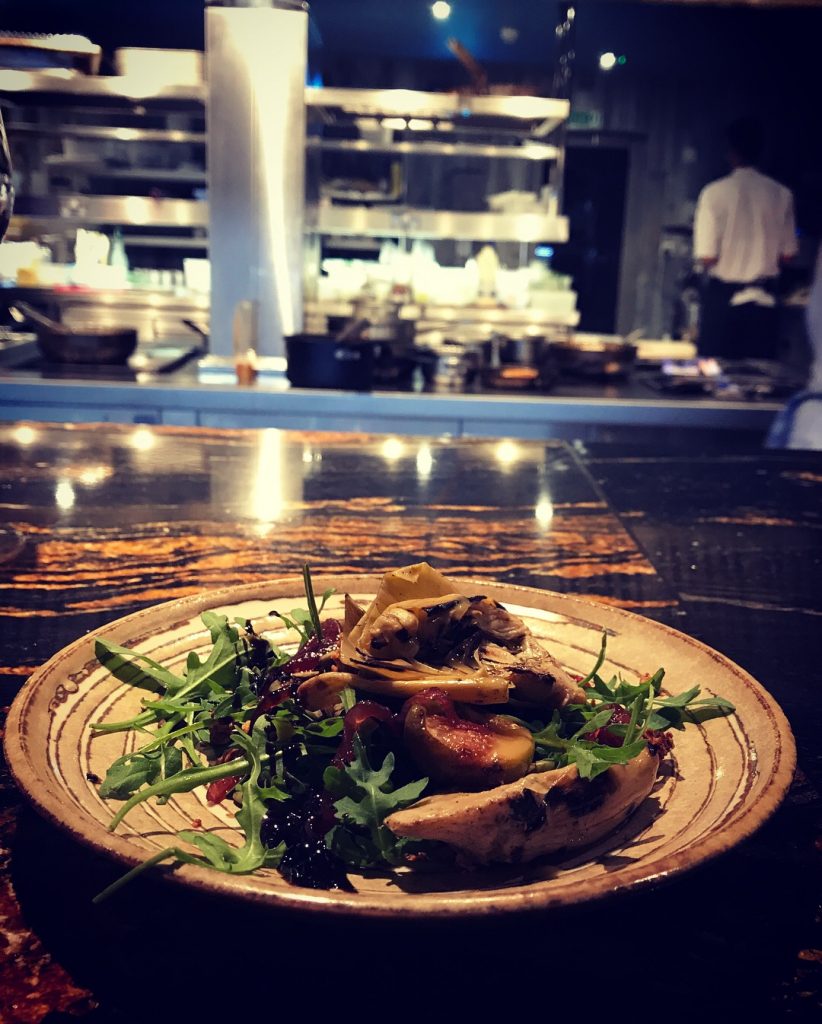 The nice thing about sitting at the chef’s table was that it offered many conversational topics as well as entertainment. There are no smoke screens and no room for errors! There were no uncomfortable feelings either, as the chefs were much too busy to stop and stare! What we did notice, and which was really lovely to see, was that other diners made the effort to pop over to the kitchen to thank the kitchen staff as they made their departures. Something you wouldn’t find or have the opportunity to do in another restaurant.

On to the main event… Sam chose the ‘Pan Roasted Sea Trout with mussel, saffron and baby gem veloute, wilted leeks, sea vegetables and broccoli,’ whilst I opted for the ‘Wild Mushroom and Scallion, Barley Risotto with garden sage and truffle oil’, we also couldn’t resist the sound of the ‘Posh Hand Cut Chips with Parmesan, truffle oil and a béarnaise sauce’. 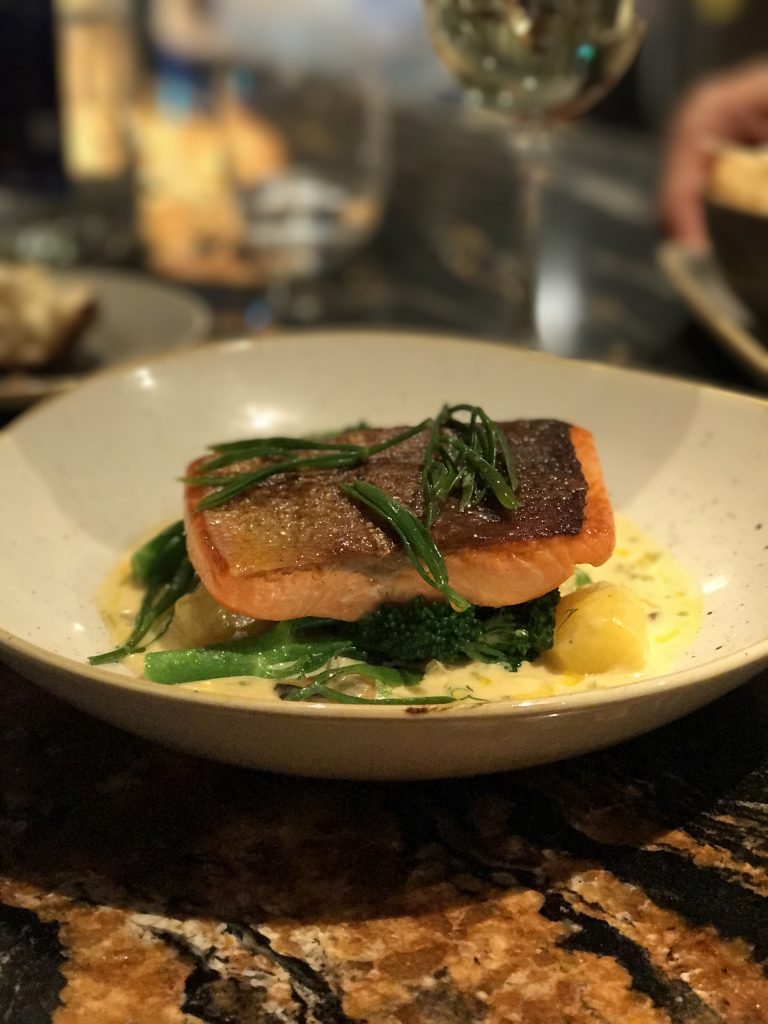 My risotto was packed full of flavour, rich with all-sorted mushrooms and deep truffle flavours throughout, I found it surprisingly ‘meaty’ for a vegetarian dish, which was great. Sam quickly polished of the Trout and most of the Posh Chips, although I don’t blame him… I could have eaten the Posh Chips as a main meal they were so tasty!

As we came to our last course, desserts of ‘Hot Chocolate Fondant’ and ‘Plum and Raspberry Frangipane Tart’ were selected. They certainly rounded us off. 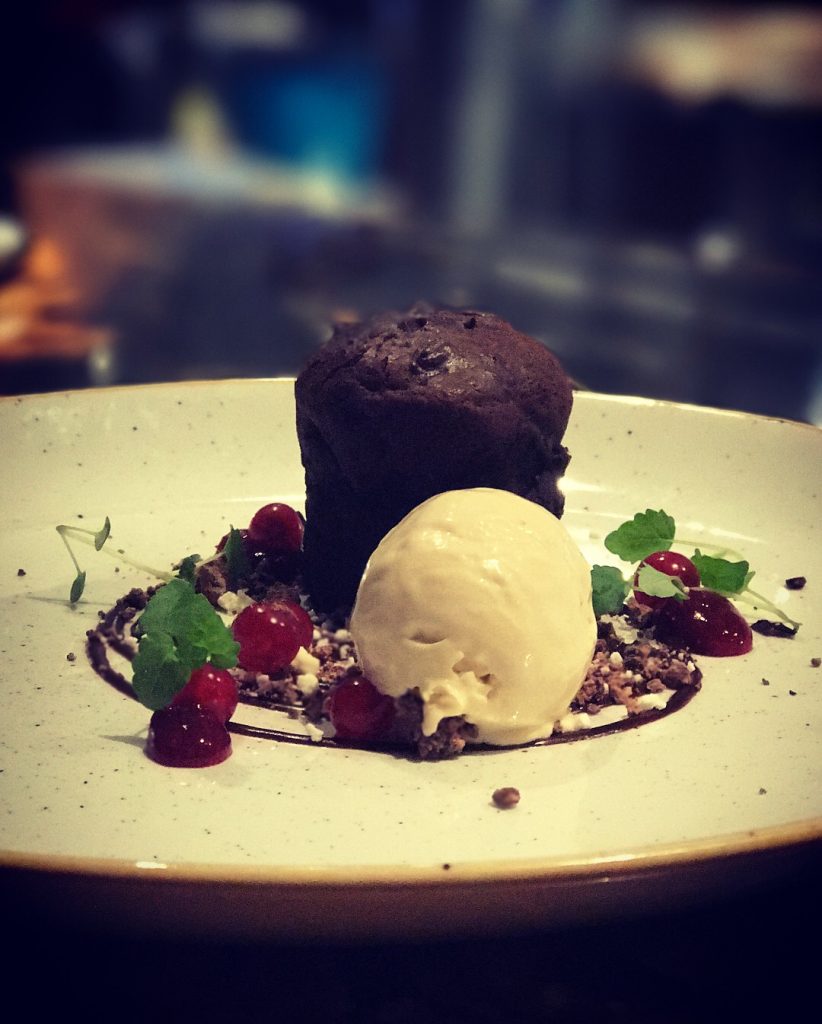 From start to finish our entire experience at The Weeping Willow was exciting, interesting yet relaxed. You can’t ask for better food served in such an incredible setting. The staff pay great attention to the small details, from filling up glasses of wine to making conversation.

I personally will be raving about my time here and I am trying to think of any excuse to go back for a visit again soon. I think that pretty much sums up a great review.