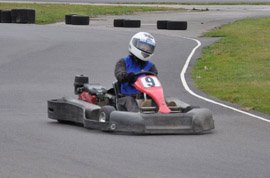 Team Bounce were invited along to Red Lodge Karting to try out their facilities whilst taking part in a friendly competition and team day.

“This was definitely an event we had all been looking forward to. Even though Karting is considered to be ‘one for the boys,’ Redlodge Karting not only offer packages for birthday celebrations, corporate days out and stag parties, but hen parties are also popular.

Having been established since 1994 the team have a wealth of experience and strive to ensure their clients have a great day out.

After being fitted with our highly attractive jumpsuits and helmets we began with a brief training session where we were told exactly how the experience would be carried out, what each flag means and what to do when they are waved.

We were to set off on four qualifying laps to decide our starting positions followed by a 20-lap sprint racing the corporate GX270 karts on the full 1200m circuit.

The competitive spirit was out in force, high fives were flying the banter was getting fierce, in fact you could feel the anticipation as we all hopped into our karts and waited for the lights to go green and the race to begin.

5,4,3,2,1 the race was underway. It was a quick start and the team battled it out on the racetrack.

It was quite obvious from this qualifier that the one to watch was Scott from Coastline Graphics, who shot around the circuit leaving everyone trailing in his wake. In fact we should have known when he turned up with his very own racing helmet!

Michele and Jane proved that girls can do just as well, leaving poor Rachel in last place after being bullied and bashed by the one and only Action Man, shortly followed by being completely shunted out of the track by Marshall Ford’s representative Seb! However Keith, who positioned in ninth place, commented, “At least I wasn’t last!”

The fight was on for second and third place. The Angry Waiter held his own and made it to second place, while Dan and Doug battled around the circuit for third. Doug was eventually pipped to the post by Dan and lost out on a much sought after trophy.

Well done to Scott who was the overall winner of the Bounce Team Day trophy.

An enjoyable afternoon was had by all. If you fancy a go or would like more information on the packages they offer then give Redlodge Karting a call on 01638 552316.