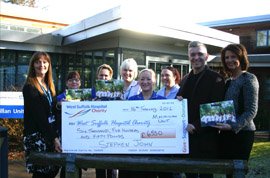 An inspirational charity calendar starring cancer patients – and the dedicated staff that have treated them – has helped a Bury St Edmunds salon owner raise more than £6,550 for West Suffolk Hospital’s Macmillan Unit.

Steve Trowles, owner of Stephen John, was inspired to support the Macmillan Unit after working closely with patients suffering hair loss. He teamed up with local businesswoman, Michele Bailey, on a charity calendar as well as organising a successful Christmas charity ball.

The calendar saw hospital staff and patients join forces by posing alongside iconic images around the town including the Abbey Gardens, the Abbey Gate and even the town’s famed beach setting when it resided in the Arc shopping centre.

After presenting the Macmillan Unit with a cheque for £6,550, Steve said: “We brought together some strong, brave and truly inspirational women as well as the caring and dedicated nurses from our local hospital.

“It was such a pleasure and an honour to work with some amazing women and we are delighted to have raised so much money for such a worthy cause. I would like to thank everyone who supported us with the calendar and the charity ball.”

Over the last few years, the Stephen John salon, on Bury’s Moreton Hall estate, have worked closely with cancer patients suffering hair loss by offering advice and support every step of the way.

Steve added: “Working with the Macmillan Unit to support women going through hair loss – and helping them feel confident and beautiful – is something I find incredibly rewarding and humbling.

“Losing your hair can be traumatic and overwhelming, but I hope I can help make it slightly less daunting by offering support and advice and by turning a new hair fitting into a positive experience.”

As part of the calendar, which was photographed free of charge by Neil Baxter Photography, all models underwent a makeover, including wearing a new wig donated by the salon.

Steve and Michele also organised a ‘winter wonderland’ charity ball at Ashlar House which saw around 250 people attend in support of the hospital.