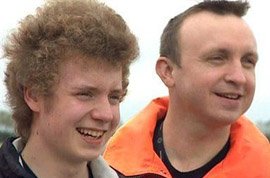 As a parent one of your many roles is to ensure that your children are safe at all times.

So when you receive a phone call informing you that your child has had a serious accident your world simply stops and then starts to spin.  At that point all I wanted was to be with our son Ben and for him to receive the best possible medical attention.

Saturday July 27th 2013 was a lovely sunny day.  Ben went down into Hartest to do me a favour.  As he got to the bottom of Hartest Hill he collided with a range rover coming in the opposite direction.  He was seriously hurt.

Within minutes I had been told and had reached the accident scene.  I scanned his body and saw that he was moving his limbs.  The paramedics and police started to arrive and take control of the situation.  One of the paramedics told me that the air ambulance was on its way.  That’s a huge piece of information to take in; it reinforced the seriousness of Ben’s accident.  No plasters or bandages were going to fix these injuries.

The air ambulance flew over the scene and within minutes it had landed and coming towards us were the Magpas Helimedix doctor and paramedic team.  It was such a relief to see them and they brought with them a huge sense of calm.

Magpas Dr Lewis and Paramedic Adam Carr were a real team, they worked alongside the ambulance paramedics and gradually took the lead.  I had a little knowledge of Magpas – The Emergency Medical Charity at this point having lived in Huntingdon where they are based, but didn’t realise how influential they would be in Ben’s recovery.

With a specialist trauma doctor and paramedic at the scene, Ben was able to be fully sedated and transferred from the car where he had landed onto the Helimedix scoop, in order to transport him to the Magpas Air Ambulance.  The interventions and treatment that the Magpas Helimedix were able to do at the scene quite simply saved the life of our son.  Without them the outcome could have been very different.  Ben’s golden hour was maximised because Magpas literally bring the emergency department with them.

Words are inadequate to express how much Magpas mean to us as a family.  Ben will make a full recovery because of what they were able to do at the scene.  How can we ever thank them enough when they have saved the life of our son?  It is even more inspiring when we learnt that many of the Magpas doctors and paramedics give their own time, to work with Magpas.

With the approval and support of Magpas, I am now on a mission to raise the awareness of this amazing charity throughout Suffolk.  I am attending organisations and telling our story, taking the Magpas stand to Fetes and fairs and talking to local businesses.

Emergency Medical Charity Magpas receives no funding from either the National Lottery or the Government.  They need to raise just under £2.8 million every year to continue to save lives of individuals like our son.

If you would like any further information  or to arrange a talk at a club, school or workplace please do contact Magpas HQ on 01480 371060 or email info@magpas.og.uk