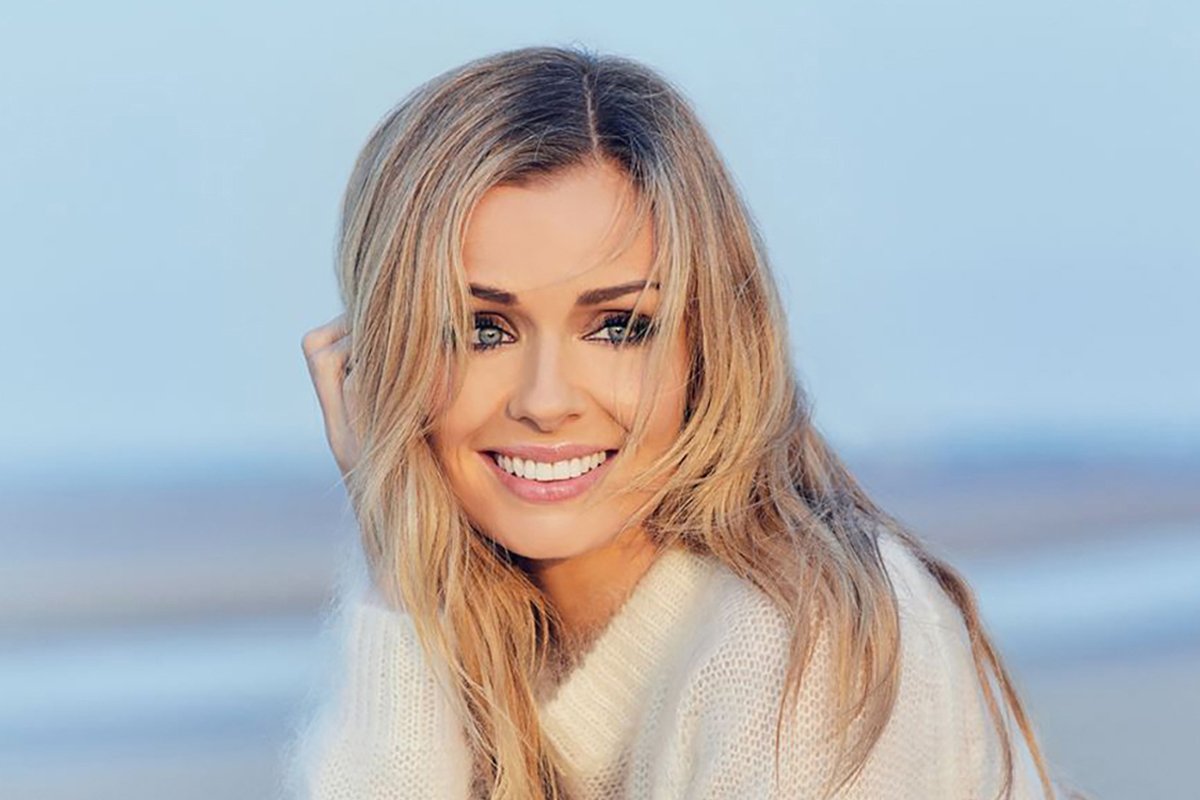 We speak to Katherine about her new album and UK tour…

For Katherine, the new album represents the culmination of a deeply emotional journey which began when her beloved father, Selwyn, died and found a new path when she became a mother. It is an album which speaks of life, hope, acceptance and a universal spirituality, and for Katherine there is a sense of a greater purpose to her performance.

The LP includes 15 brand new tracks featuring Katherine’s personal favourites new and old; from the time honoured ‘Make Me a Channel of Your Peace’ and ‘Morning Has Broken’ to covers of Stormzy’s ‘Blinded By Your Grace’ and ‘Never Enough’ from The Greatest Showman, alongside original material including ‘Xander’s Song, written for the newest addition to her family, her son born earlier this year.

Cherished as one of Britain’s all-time favourite singers, last year Katherine was officially crowned The No.1 selling ‘Classical Music Artist of the Last 25 Years’ by Classic FM, and made chart history when her last album, ‘Celebration’ became her 12th UK Classical

No.1 album in 12 years. These record-breaking achievements cemented Katherine’s position as the world’s most prolific artist in UK Classical chart history.

As one of the UK’s greatest musical exports, multi-award winning Katherine has performed all over the world, for the Pope, for Presidents and is a favourite of the Royal Family, having been invited to sing ‘God Save The Queen’ at Her Majesty’s Diamond Jubilee, perform at Her Majesty’s Coronation Concerts at Buckingham Palace and more recently, by special request at Her Majesty’s 90th birthday celebrations at Windsor Castle.

She has embarked upon numerous sold out tours and duetted with such names as Placido Domingo, Andrea Bocelli, José Carreras, Dame Kiri Te Kanawa, Bryn Terfel, Rolando Villazon, and Il Divo, amongst others.

Katherine was awarded an OBE at the 2014 New Year’s Honours List for her services to music and charity.

Last year, she wowed audiences and critics alike with her stellar performance as Julie Jordan in Lonny Price’s semi-staged production of Carousel at the London Coliseum.

Katherine will be touring new album,‘Guiding Light’ this April and May, performing 18 English dates, alongside concerts in Glasgow, Belfast and Dublin, plus Cardiff and Llandudno in her native Wales. She will be joined by one of the UK’s most versatile orchestras, The London Concert Orchestra, under Musical Director Anthony Inglis for the majority of the tour.

The orchestra can be heard regularly at the Barbican, Royal Festival Hall and The Royal Albert Hall, providing audiences with an eclectic repertoire from popular classics and opera, to hits from ﬁlms and musicals. The London Concert Orchestra has worked with Katherine for the last two years in her series of hugely popular Christmas concerts.

The Orchestra performs regularly for BBC Radio 3 and Radio Ulster, including participating in the annual BBC Proms in the Park celebrations.

Rachel Ducker catches up with Katherine to have a chat about her new album and UK tour stopping by us in Cambridge and Ipswich in May.

How did you get started on the path of classical music?

I learned to sing in St David’s church in Neath as a chorister when I was seven and through my choral singing I fell in love with church music.

I started having singing lessons, at which point my singing teacher suggested I start with a classical piece of music because of my choral training. It immediately clicked and I knew that was what I wanted to sing.

Who has musically inspired you?

I didn’t really hear classical music until I started having singing lessons. At home, my family used to play all the big voices – like Barbra Streisand, Dame Shirley Bassey and my mum used to show me black and white films of Judy Garland and Julie Andrews. I really think it was those kinds of women that inspired me. It wasn’t until later when I heard Maria Callas, that she became my operatic inspiration, but it’s definitely always been strong females.

What do you think you would be doing now if you hadn’t chosen the musical route?

Well because I’ve been singing since I was four, I don’t really know any other route that doesn’t involve music, but if I hadn’t become a performer, I think I would have continued on with teaching.

When I was studying at the Royal Academy of Music I became a singing teacher for a couple of years, and then I got my record deal and obviously my life changed.  I really enjoyed my teaching and I’m still in touch with some of my students. I’ve always said it’s something i’d like to do later on in life. 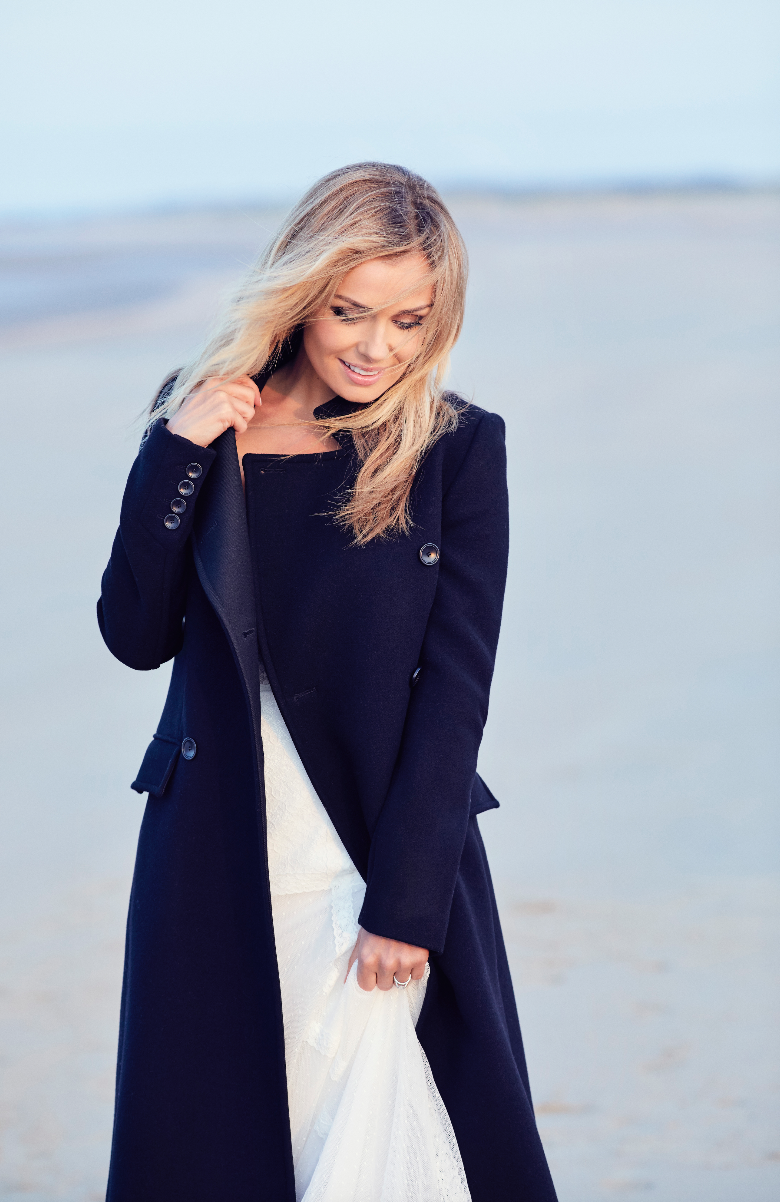 Your new album is out now, what were your intentions when you first started making Guiding Light?

Well it’s been four years since my last album came out and my life has changed so much in that time.

I’ve got married, I’ve had two children, I’m very settled and happy, and I felt that was a nice mood to take into the studio and create an album that summarised how I was feeling.

How did you go about choosing the songs that you cover on the album?

I wanted it to be a very spiritual, emotional, intimate album, so it was songs that touched my heart and it wasn’t about hitting all the high notes and how loud I could sing, it was really about trying to connect and move the listener in the way that these songs touched my heart.

Do you have a favourite track and why?

I love to sing the song from The Greatest Showman called ‘Never Enough’ because it’s such an amazing and well-loved song. There’s also a very different interpretation of Stormzy’s ‘Blinded by your grace’. My daughter actually has a tiny little speaking part at the end of that song and it always makes me a bit teary when I hear her speak on the track.

Is it correct that you wrote a song for your son on the album – Xander’s song? That must have been really special to record.

It’s true – I actually didn’t intend to write a song for Xander. The album was nearly finished, I was upstairs in his bedroom feeding him and he’d fallen asleep in my arms and I basically wrote a prayer for his life, like a lullaby prayer with the same things that any mum wishes for their child. I played it for my producer and he said ‘we have to include this in the album’ so we managed to fit it in. He’s (Xander)  probably going to kill me when he’s 18 and think it’s the most embarrassing thing ever, but for me it’s nice to be able to show him that at the time of making this album he was there with me.

Has becoming a mum changed your outlook on music at all?

There is no average day in my life! There hasn’t been an average day in about 15 years (laughs) and there’s no pattern. I do so many different things from one day to the next. Whether it’s rehearsals or touring, or a day of promoting an album with interviews like this, through to presenting Songs Of Praise, or days of being mummy and taking my daughter to school or to swimming lessons. So there’s no routine but that’s probably why I love it so much and never get bored.

How did it feel to be awarded an OBE?

Very surprised! I didn’t imagine I’d receive one at such a young age. It was a real shock when I received the letter but so special because it was given to me for services to music and charity and the charity aspect was to do with my work with macmillan but mostly I think for my work with the military which is something I’m really proud of.

Your UK tour starts in April and stops by us in Ipswich, what can fans expect?

It’s going to be some of the songs from the new album as well as some of the favourites from all the other albums. I have a full orchestra with me because I strongly believe when people are spending the money to come to a concert I want to give them the best live experience possible. There are cuts in all sorts of music, but I feel strongly that we should bring with us a full orchestra with live musicians. I’ll have a wonderful special guest, my conductor Anthony Inglis who has been with me from the beginning, and they’ll be lots of frock changes and lots of fun! For me, it’s about singing the songs and connecting with people, but I also like to chat between the songs and it’s more of an evening with me because there’s a lot of interaction. 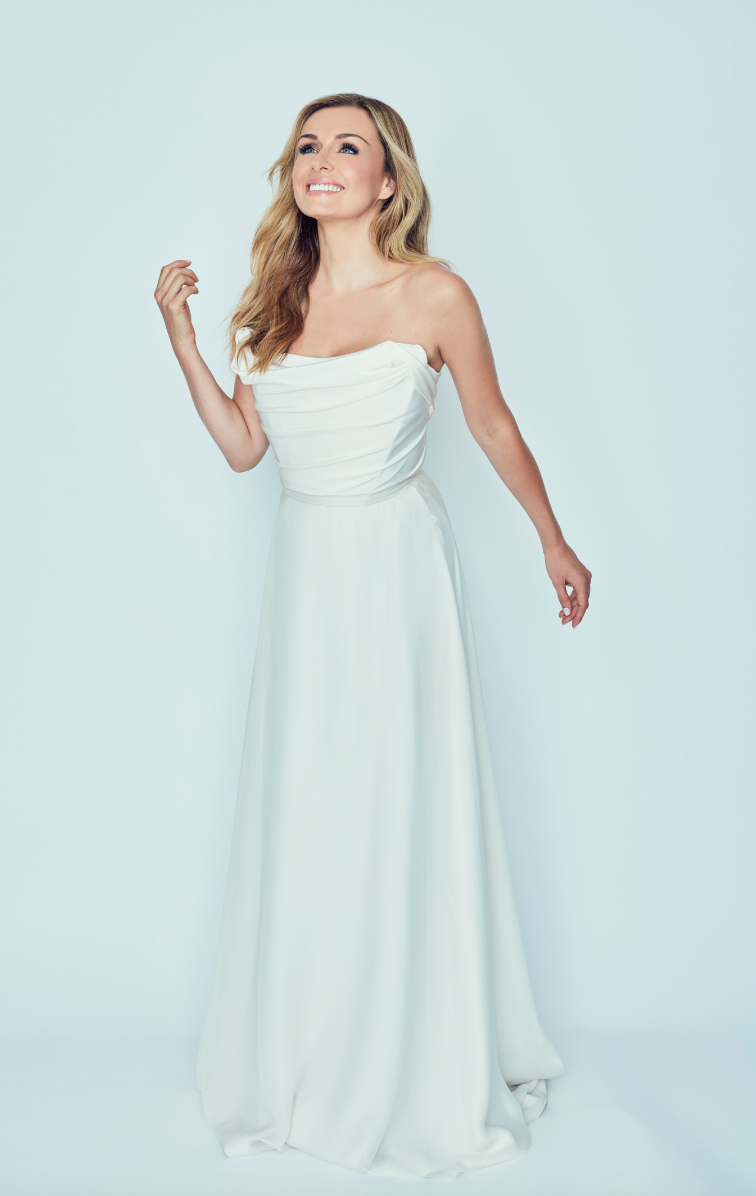 Do you enjoy touring?

I love touring – it’s my favourite part of everything. I love being in the studio because you can make something, focus, get it exactly right and be really creative, but when you’re out in front of an audience and you see how the music affects them and how their eyes change, you feel the atmosphere in the room and nothing comes close to beating that. So that’s my favourite part of what I do.

Have you ever dealt with performance anxiety?

Yes, when I was younger as a teenager singing, I definitely felt that nerves got the better of me.

What would you say has been the highlight of your career so far?

I would probably say going out and entertaining the troops. Going and singing in Afghanistan, Iraq and Kosovo, there things I didn’t imagine doing as a young singer, but I’m so glad that I did because they’ve become some of my best memories and it’s so emotional.

Do you have any ambitions left to achieve?

Lots! I think you’ve always got to have new things to be striving towards. I’ve never done a soundtrack, or something like a Disney soundtrack or an animation which I think my children would love. Then it’s just to continue doing what i’m doing. I think doing a soundtrack would be really fun!

You’ve worked with some great musicians in the past – is there anyone you would still like to work with?

I feel very fortunate that I have been able to sing with Placido Domingo and José Carreras multiple times. I was due to sing for Luciano Pavarotti but sadly he fell ill just before I was meant to perform for him. I wish that could have happened because to have sung with all three tenors would have been amazing.

What advice would you give to someone wanting to follow in your footsteps?

I would say to get as much experience under your belt as possible, so join school choirs, church choirs, county choirs and there’s national youth choirs of Wales and Great Britain.

Enter competitions. It doesn’t matter if you don’t win them, I didn’t win many, it’s just about getting the experience.

There’s also the two operatic societies, and I’d say to put on plays and shows and just get as much performance experience as you can, so that when you get your big break you’ve already put in a lot of work already, you know how things work and you’re ready for the opportunity.

What is next for you after the tour had finished?

Well lots of international concerts, but immediately afterwards it will be taking a break with the family as it’s quite an intensive tour and going straight back to mummy duties. 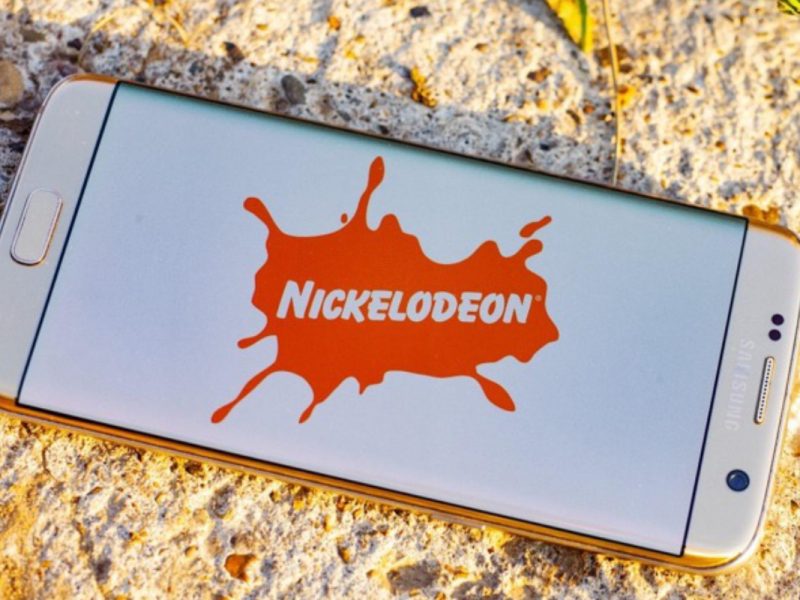 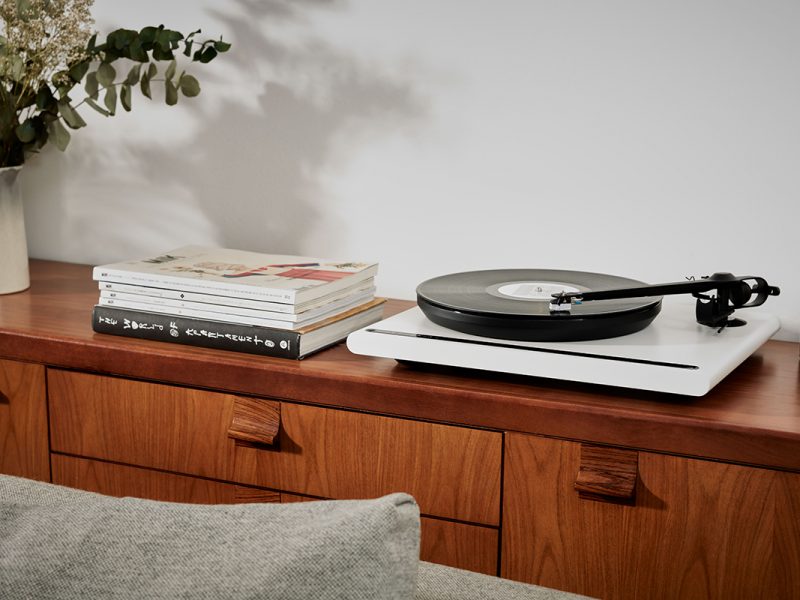 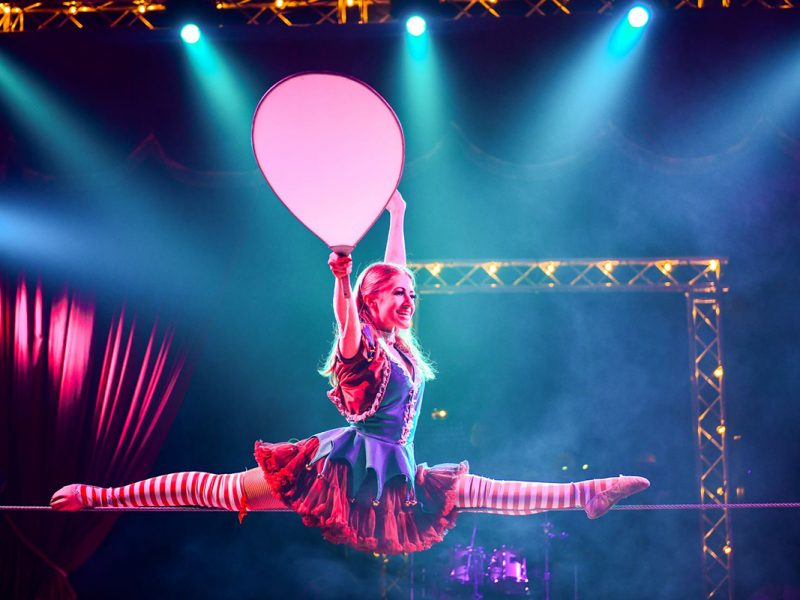