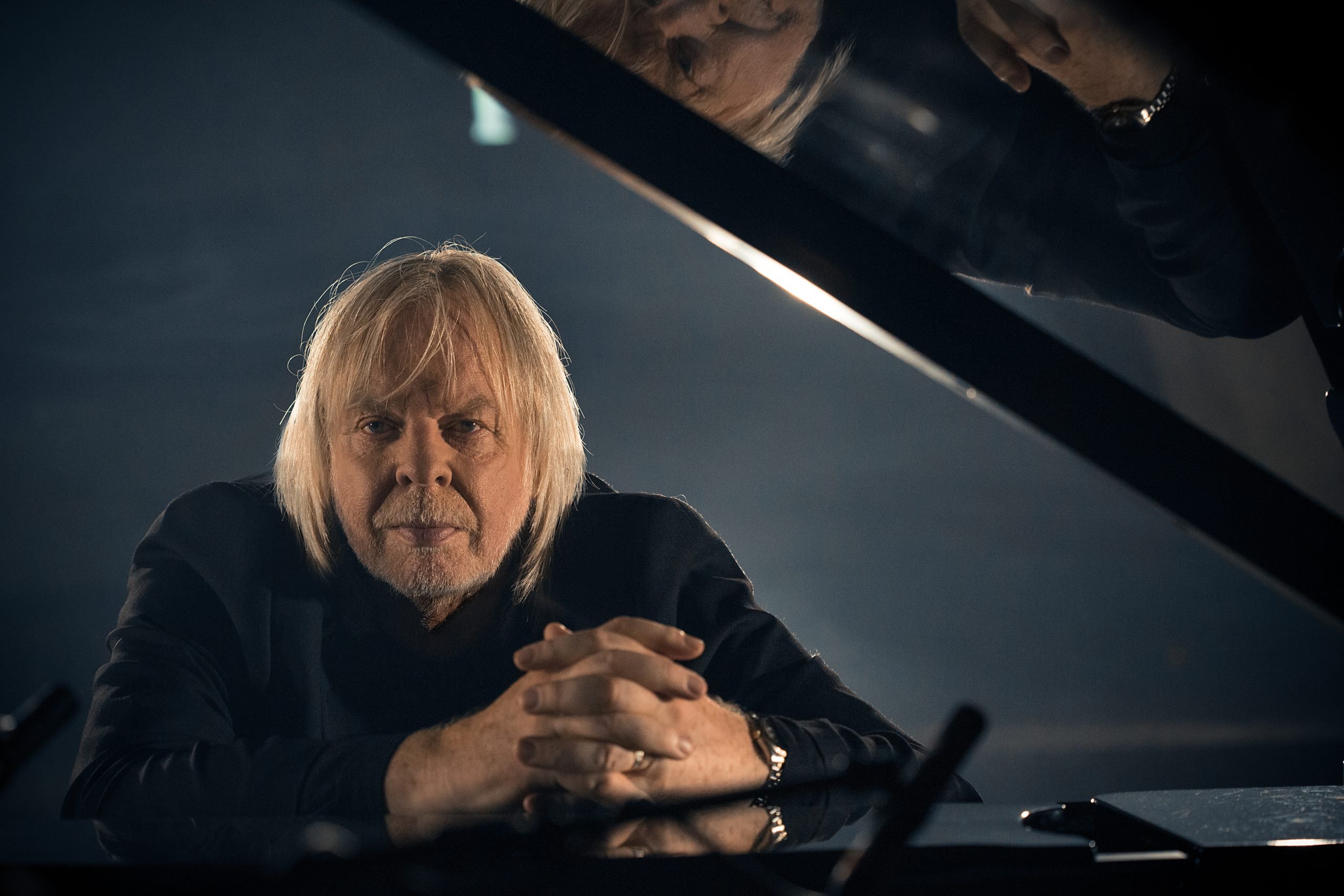 Following the hugely successful Piano Portraits tour last year, in support of the album of the same name, Rick Wakeman will return in Autumn 2018 with a new show based on the follow up release, entitled Piano Odyssey, which will be released September 14th.

The now twenty-six date tour will feature even more classic tracks given Rick’s unique piano treatment, and will travel to towns and cities not previously visited in 2017.

Upon the release of his Piano Portraits album in January 2017, the YES keyboardist made chart history, becoming the first solo piano album to enter the UK’s Top 10, eventually reaching number 6. Inspired by the unprecedented public reaction to his cover of Bowie’s Life On Mars on BBC Radio 2 a year earlier, the album features instrumental versions of hits that Rick was originally involved with, such as Space Oddity and Morning Has Broken, as well as others which he chose for their melodies, including Stairway To Heaven and Help!.

The 2018 concerts will be based on a selection of tracks from both Piano Odyssey and Piano Portraits, showcasing music that has a special connection with Rick’s own personal musical journey, all accompanied by his hilarious memories and anecdotes about the tunes, plus a few musical surprises.

In December, an additional special Christmas tour will follow, in which the setlist will be given a distinctly seasonal twist.

Rachel Ducker catches up with Rick to hear all about it… 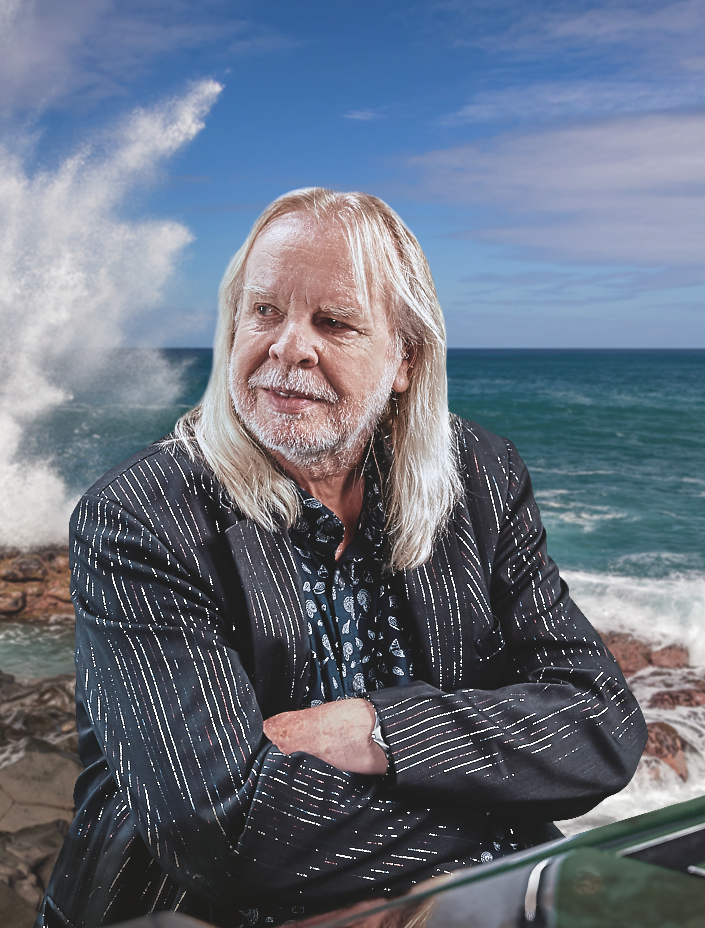 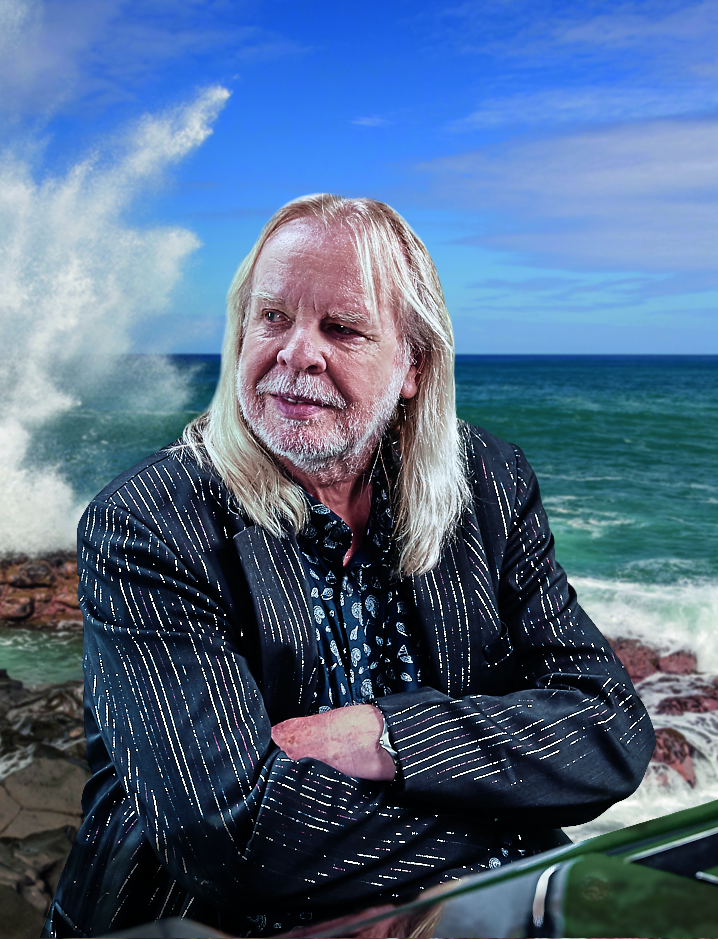 R: Hello Rick how are you? I’ve been looking forward to speaking with you!

R: So first I wondered how you got into music?

It was all I ever did, really.

I was born in 1949, and by then all the concert parties had folded up. My dad was a great piano player, we had a little semi house, and there was a piano in the room downstairs. On Sundays all of my relations used to come round to sing and play in the evening.

Nobody really had a telly in those days. I was three or four years old and I would climb out of bed and sit at the bottom of the stairs to listen to all of this music coming out and I thought it was wonderful. So all I ever wanted to do was to play music.

My dad sent me to piano lessons when I was five and that was all I did. I went through all the grades; I did a scholarship and my dad encouraged me to listen to many types of music, jazz bands, rock bands, dance bands, pop bands and apart football that was my life.

R: So what would you say to someone who has just started to learn how to play piano?

Always be true to yourself.

When you’re playing, you will get to know quickly what sort of standard you can reach. You don’t have to reach grade As, or doctors standards, just standard you know you’re comfortable with – and enjoy yourself, if you can do that then other people can enjoy listening. I always think it’s good to set yourself targets, that doesn’t do any harm.

Someone at a show last year asked me “if you weren’t doing this right now what would you be doing,” and I said “well, I will be home playing.”

R: Well, that was actually one of my questions! It’s nice to hear you have such passion for music and that you would be doing it, anyway?

Yeah, on my last school report occasionally the headmaster would write comments, I wish I still had it – I think my mother destroyed it out of disgust. It said, “Wakeman will either end up in one of three places, Westminster, on stage at the London Palladium, or Wormwood Scrubs prison”.

I have done two out of three, [laughs] I have been an advisor at Westminster, on intellectual property rights, I’ve done the London Palladium a few times, but not made Wormwood Scrubs prison. 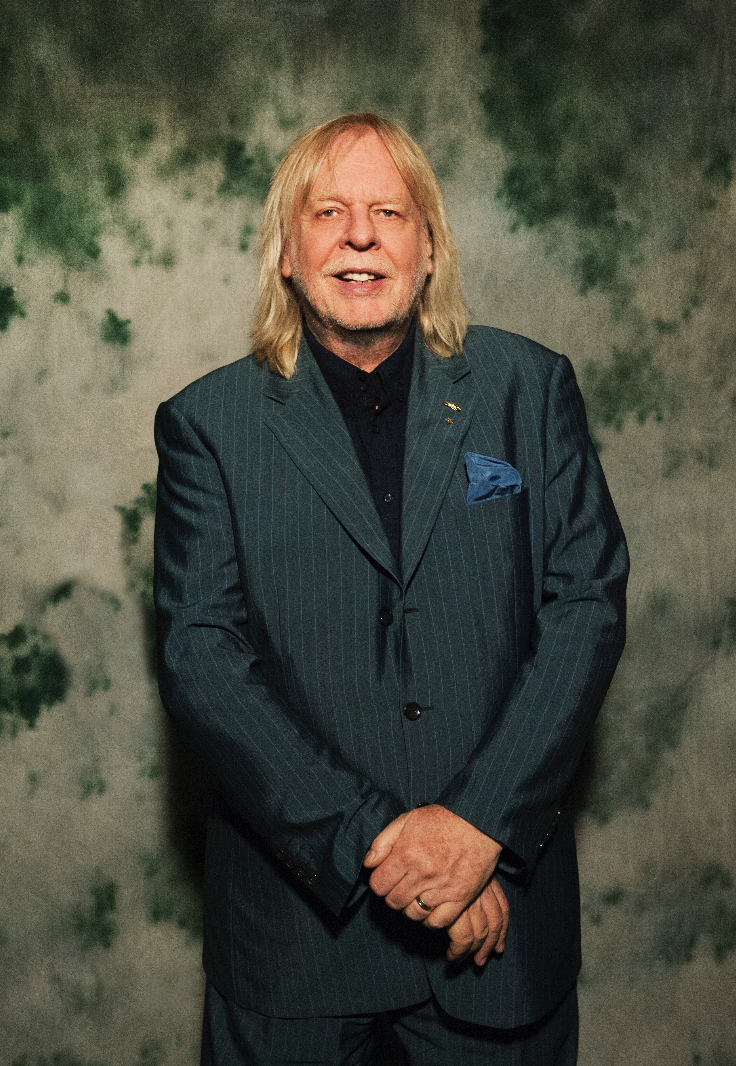 R: I think those two would be my preference!

Yes, I have probably done the right two out of the three!

Well, it’s still going, there’s two ‘Yes’s’ out which is ridiculous, it’s a rather stupid thing when bands get on, and there are lots of different members you suddenly have two bands the same name, it is preposterous but there you go.

Jon Anderson, who was the original founder and the singer, Jon and I worked together with Trevor Rabin, who wrote ‘Owner Of A Lonely Heart’ and that kind of thing. We’ve just come back from a big tour of America and Japan, so we’re still out going.

I joined them in 1971, three years after they had formed, and have been in the band, off and on, for about 18 years. ‘Yes’ has always been a tempestuous band, we would always argue like crazy, but there’s nothing wrong with that as it’s what produces the music.

There are not many jobs where you‘re on tour, you wake up in the morning, you come down to the hotel, you have breakfast together, then you travel together, then you work together, the only time you don’t see people is when you go to bed! I don’t care how much you like the people you work with if you had to do that with them every day there would be certain things that would niggle you!

I realised early on that it’s not music that breaks people up it’s that you are living in each other’s pockets. So now in the band we give each other a lot of space, and that’s why it works so well.

R: I guess you’ve got the balance right then?

Yeah, it’s all down to getting the balance right and if you do that, then that’s fine.

R: You’ve had the chance to work with the likes of Elton John, David Bowie, Cilla Black, Lou Reed, and Black Sabbath…

It was great! It doesn’t happen now, that whole thing probably lasted about four or five years, but it was what I call the proper days of sessions. I was doing two a day or sometimes three; I did over 2000 tracks with different people, some were poor, some were fantastic!

I learnt from every one, it was a great apprenticeship course; I was working with some fantastic artists and also some fantastic producers and engineers. After doing so many sessions over those years, I knew all the engineers, all the studios, all the producers it was like a natural continuation, which was great.

R: Now I believe you live somewhere on the Norfolk/Suffolk boarder?

I do, I live just outside Diss.

R: So Bounce is an East Anglian publication so all of our…

Yeah, we know your mag!

My favourite place? Oh gosh, there’s a load, we are fond of the sea, so we do travel to the coast quite a bit, Walberswick, Southwold, Aldeburgh, and we love Covehithe!

Yeah, we love walking down to that lagoon; we love going to the fens; we love RSPB Minsmere, and we are members. I suppose that’s the joy about this East coast – there are lots and lots of options.

R: Someone once asked me “what is it about this area you love?” and you’ve just described it.

It was bound to happen with some of the new road structures coming in, but there are lots of houses going up, in some places they are doing it really well and others bewilder me! 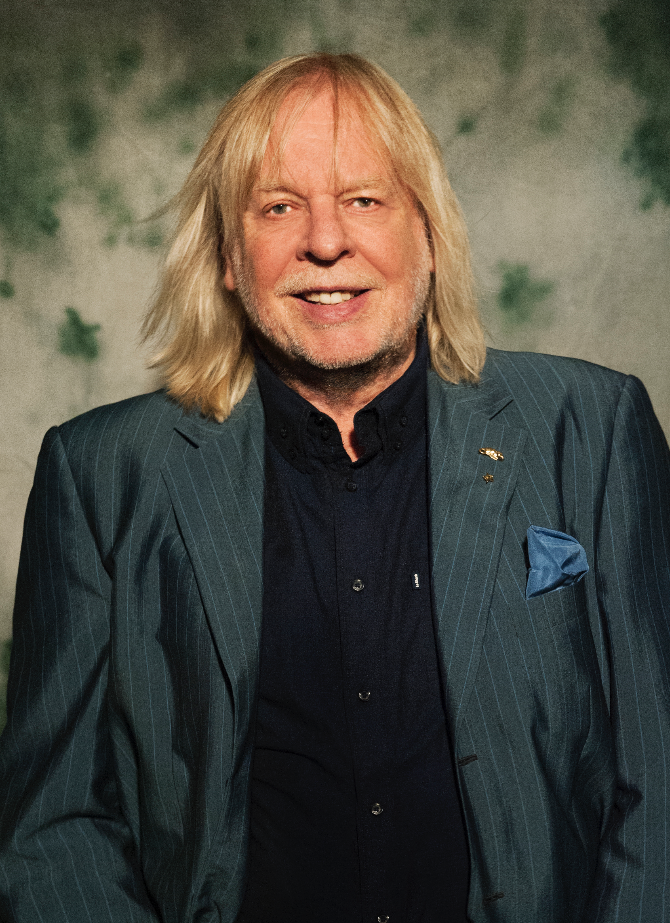 As I am sure they do you! It’s a game that my wife and I play when we drive along! I understand that villages and towns have to expand, but be careful how you do it! You’ve got to think of how it will look like in the future. When I was a kid, every place they built in the 30s had to have a parade of shops, with the essential shops. That’s what made it a community. There is none of that now, so how the hell can you have a community?

In the places it does exist, it’s getting eroded. We lost our local post office, I mean, I was furious; I was one of those with a placard on the street!

The post office we had, we know, made a profit and served the community.

Sometimes decisions are made that don’t look to the future and that annoys me. But that’s happening all over the country.

R: I know what you mean; we don’t even have any banks around here anymore!

No, we don’t – the bank that I bank with has gone.

The people, who sit in their offices in front of computers and make these decisions, have forgotten how important contact with human people is, it’s nice to see somebody. Its really important.

I am a big advocator of keeping village shops open and when I find one goes, I get really upset..

R: Now, onto your new show stopping by us in Ipswich at Christmas, how does this differ from the previous one?

It’s great because it’s just down the road from me, it’s a fun concert – it’s a mixture of music, some of mine, some with other people.

I’ve worked with such as David Bowie and Cat Stephens, plus some music people wouldn’t expect, and in-between all the pieces there are ludicrous stories, which all have elements of truth. Some as little as 1% and some have 99% so it’s up to people to determine what they think is truth or not. It’s a hilarious evening.

I haven’t played Ipswich for a little while now, so it’s nice to have a show somewhere local.

R: I always like to ask a few readers to submit questions… So the first is from our previous cover stars Jesse Quin from Keane, he asked – Sequential Circuits or Moog?

R: Finally, from my good friend Brian Bush, “If you were at the start now which band would you be in and why”?

Blimey! [pauses] wow, gosh, that is a really good question!

Gosh… I love doing piano things an accompanying people, so I would have loved to have worked with Amy Winehouse, it would be great to strip everything back  and do something with just the piano.

With somebody like Adele would be great! The piano is the most amazing framework for a voice.

R: You are my cover for November so I hope you spot yourself in many places over Norfolk and Suffolk!

That’s very kind, thanks Rachel I appreciate it!

All the best for the show!

Yeah, if you come along do come and say hello!

R: I certainly will!

Tickets for both runs of the tour are available at myticket.co.uk, and prices will begin at £29.50.