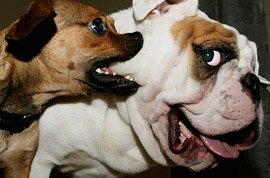 Does it have to be dog-eat-dog?

COMPETITION often surrounds us in many aspects of our lives, none more so than in the business community.

But does it have to be such a “dog eat dog” world?

I must confess that I have always been a competitive person. At the age of two my family introduced me into the world of martial arts; in fact I’ve been told that I could even count one to 10 in Korean before I could in English.

I have always taken my martial arts practice very seriously, and being competitive is a very big part of that. However, performing a hobby or sport can often be very different to dealing with real life situations.

Although I do have a competitive streak, in business I like to think that I have a slightly different approach. I try to be fair, honest and reliable, without demonstrating too much of a cut-throat attitude.

In my experience I have found that the “dog eat dog” concept might be the preferred method for some people. However, it’s not my way. Maybe it’s the element of respect and courtesy that I also learnt in the martial arts that has led me to adopt a different path.

I personally believe that there is enough work out there for everyone. By working together creatively, it can often help us to grow and improve our businesses collectively.

Let me give you an example. I often outsource some of my work and I also have friends in the same profession who often help me out where needs-be. We work closely together and have mutual respect for each other’s strengths and weaknesses.

I like to think that as our society begins to evolve, we might start to see things change in a slightly different way. We may suddenly begin to understand that although being competitive is often considered to be healthy, in some instances it can also be seen as detrimental.

I have always been brought up to believe that what we generally give out to others usually returns to ourselves. Sadly, on the odd occasion, I have witnessed business people who still haven’t incorporated the positive aspects off this simple philosophy.

In my opinion, however, anyone who has to gain work through under-handed methods is probably not going to be too successful in business in the long term.

Generally my belief is that people eventually become recognised for who they truly are.

It has often been said that “business is just business”. However, we do have to continuously interact with other people on a daily basis. How we conduct ourselves I think is really important.

Do we have to adopt a dog-eat-dog approach?

I don’t think so. Personally, my overall aim in business is to be as successful as I can, by collaborating with other people rather than excessively competing against them.