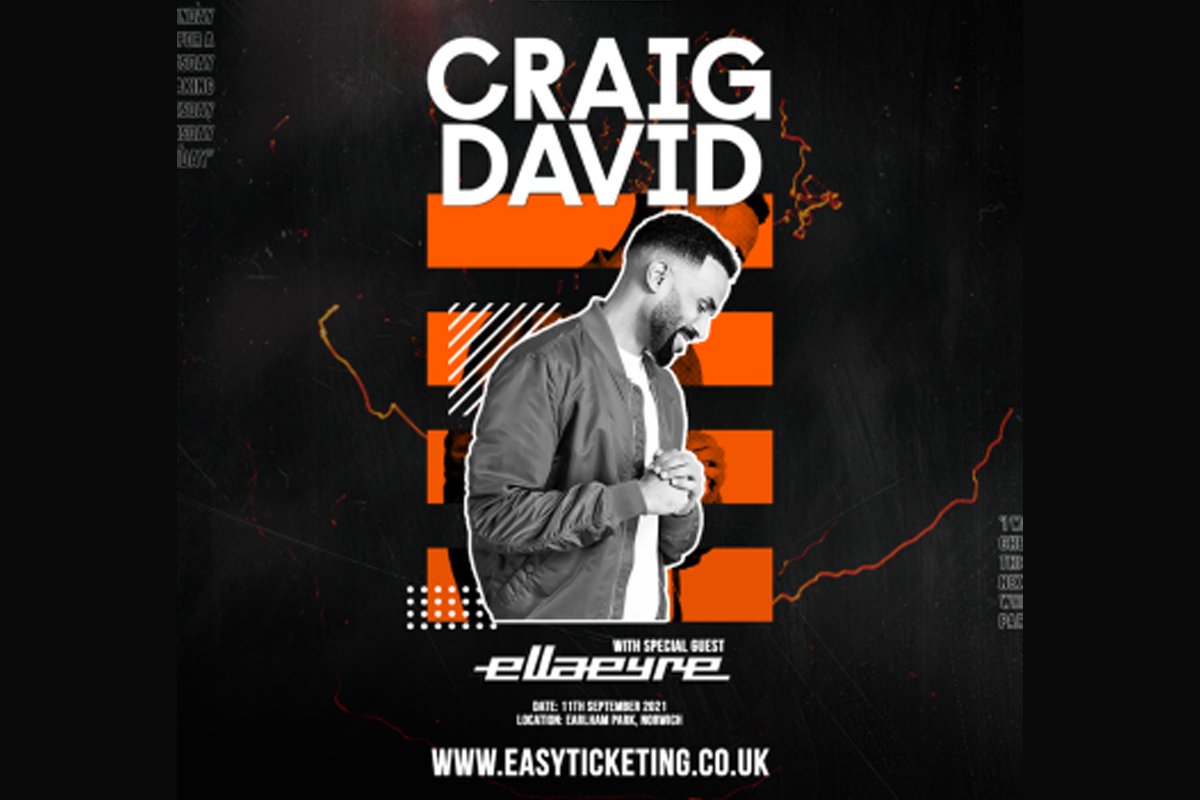 Global superstar Craig David and his live band will perform LIVE this summer with a huge show in Earlham Park, Norwich on 11th September 2021 with support from Brit-Awarding winning Ella Eyre and further acts to be announced shortly.

Marking the momentous return of live music promoters are preparing to unleash the ultimate summer party. Tickets for the event go on sale at 9am on 11th March 2021 via easyticketing.co.uk. Fans can sign-up for tickets from today.

MOBO Award winner Craig David is celebrating the 20th anniversary of his critically acclaimed debut album ‘Born To Do It’ across this year with a handful of arena shows. The Norwich show is one of a few exclusive outdoors shows planned for summer.

James Penny, from M&B who is promoting the show said, “We are more ready than ever to unleash the ultimate summer party!  With live music officially back on what could be better than sizzling performances from the king of garage Craig David and pop queen Ella Eyre lighting up Norwich with their party vibes! Attendees can expect a full on carnival atmosphere with the biggest bangers.”

Born to Do It made David the fastest selling British male solo act ever when it came out, moving over 7.5 million copies worldwide. In the subsequent two decades, he’s gone on to release another five albums and rack up 14 BRIT Awards, two Grammy Awards, in addition to a record haul of 5 victories at the MOBO Award and mammoth run of 15 x Top 10 singles.

The album spawned countless Top 10 singles, including ‘Fill Me In’, ‘7 Days’, ‘Walking Away’ and ‘Rendezvous’, and became the fastest-selling debut album ever by a British male solo act, a title the LP still holds to this day.

After a few years out of the limelight, Craig staged a massive comeback with an acclaimed live set at Glastonbury. He’s since found a new legion of fans by collaborating with artists such as Big Narstie and Kaytranada.

On the dates Craig David is joined by the voice of some of the biggest bangers in pop Ella Eyre. Ella is the  vocalpowerhouse behind Rudimental’s double platinum number one single ‘Waiting All Night’ , DJ Fresh single ‘Gravity’, and with Sigala ’s ‘Came Here for Love, and ‘Just Got Paid’

Her solo efforts ‘Deeper’ and ‘If I Go’, also landed her at the top of the charts.  In 2018 Ella released Answerphone with production duo Banx & Ranx featuring Yxng Bane. With a dance-hall inflected beat and Ella’s irresistible knack for a moreish, lovelorn hook, it was an instant hit with over 100,000,000 streams and counting.

Along with a star-studded program packed with hits, M&B’s world-class staging will include dazzling light effects, atmospheric lasers and breathtaking pyrotechnics, putting all music fans right at the heart of the action.

The festival vibe continues away from the excitement of the main stage. Earlham Park is set to be transformed into a buzzing revellers’ paradise, with an array of street food stalls and cocktail bars. You won’t want to be anywhere else!