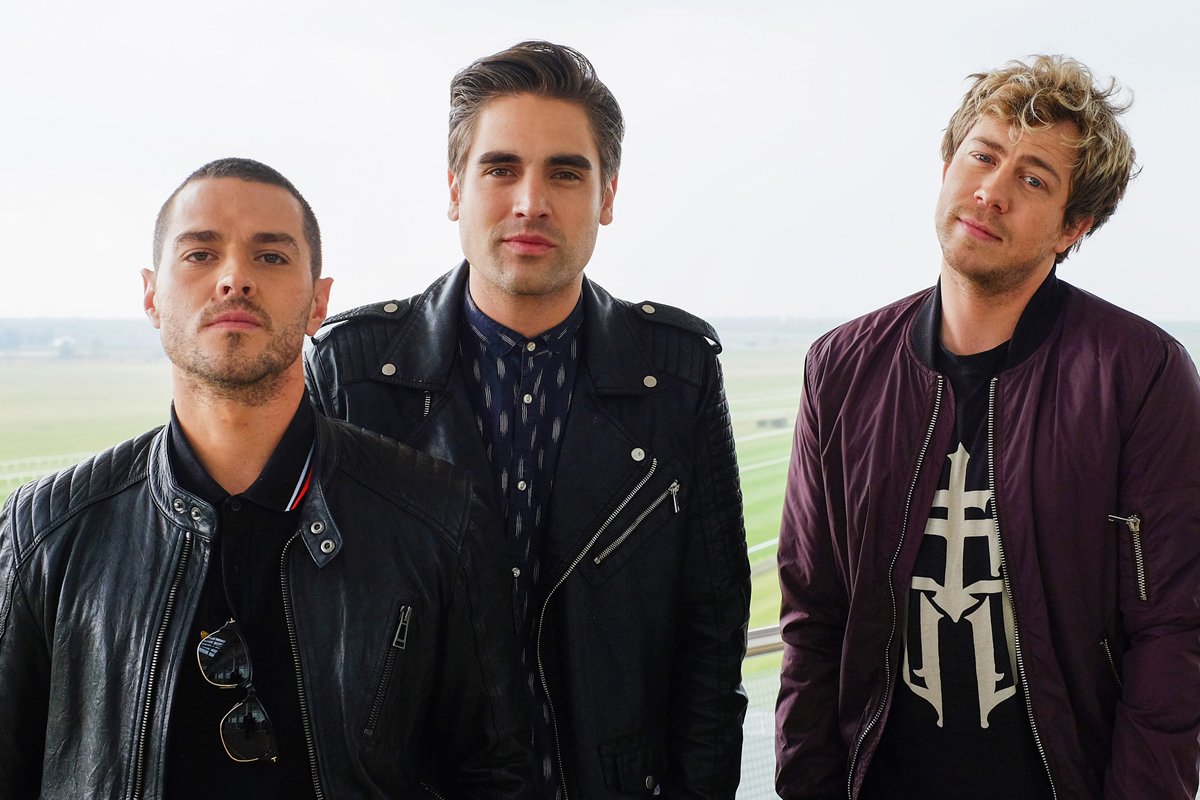 Celebrating Newmarkets 350 years, transporting you to the ‘Year 3000’ for a night of fun, frolics and fantastic racing, pop-rock heavyweights, Busted will be storming the Newmarket Nights stage on 22nd July.

Almost 11 years after the mega-selling, double-Brit-winning pop-rock trio said goodbye after a record-breaking 12th show at Wembley Arena, James Bourne, Matt Willis and Charlie Simpson are back together.

The reunion that many – including, to be fair, the band themselves – said would never happen?

Editor Rachel Ducker, caught up personally with Charlie Simpson, for an exclusive interview.

Q: So it’s the reunion everyone said would never happen… and Busted are back, how did it all come about?

We hadn’t been in contact for a long time; we’d gone around eight years without seeing each other. We started hanging out again and realised that we actually shared some common ground. It opened the idea up, and we thought lets start doing this again. So we decided to start writing to see what would come out and we ended up coming out with some great songs, so here we are again.

Q: This time round (I hope you don’t mind me saying,) you’re all a little older, and a little wiser and you know the industry well. Do you feel there is anything distinctively different about the band second time round?

Well I think because of what you’ve just said, that makes a big difference, we are coming at this in a completely different time of our lives where we’ve been doing a lot of stuff you know, but, we’ve had 10 years in the industry now and we know how it all works. I think when we were younger we were sort of naïve sixteen year old’s and it was a great time, it was a sort of whirlwind and I think we went on board with a lot of stuff and now we are in control of what we are doing and that makes a big difference I think.

Q: I also hear you and Matt are dads now too? Does that make being on tour hard?

It’s tough man, you know, being away from my kids, but we try and get them to come to some places that we’re at and if we get a day off we can just head home for the night so, its a bit of a balancing thing. I think the hardest part is going away and being away from your family, but we get to have great fun as well.

Q: Do you ever have any regrets of leaving Busted when you did, or do you feel it was always the journey you were supposed to take?

Absolutely right, it had to happen you know. I don’t think we would be here now if that hadn’t of happened, everything that’s happened since the band broke up means we’ve all got our own experiences outside of this band and I think that’s made the band stronger for it now we are doing it again.

Q: How did you find the transition from fresh-faced boy bander to hard rock man?

It had its challenges, Fightstar were lucky enough to have support, which was a big help, I mean it was obviously a completely different thing so I think it took a few people by surprise, its been great to now come back to this and everyone’s gone away and done they’re own thing. I was lucky enough to do the Fightstar stuff and to some solo stuff and we’ve had great experiences and now we are all on the same page and I don’t think we were there five years ago.

James told me he’d resigned to the fact it was never going to happen again and he was uncomfortable with that, so it was as much of a shock to us as it was to anyone else.

Q: Do you regret missing out on the whole McBusted trip?

No, that was something that Matt and James did and it would have been weird for me to be involved with that as I don’t really have a relationship with those guys that Matt and James do. I’ve always thought to myself if I was to come back to do Busted again it would just be with Matt and James. I think what they’ve done over the last couple of years is very much their thing.

Q: How long were you interested in returning to the group before you announced it?

We’d been talking about it for the last couple of years, but only really seriously in the last 6-7 months. We went to Philadelphia to go to a studio and it was after that we really sort of knew that we were going to do it again.

Q: Going back to the start of your career, we’ve seen that you are musically talented and I’ve heard from sources that your family are too going back many generations, in fact your first band was with your two brothers, so what inspired you to get into music?

I think, when I was at school we all had to learn an instrument; it was part of the curriculum, so there was something about the guitar that just really appealed to me. Then I remember my dad playing a lot of music when I was growing up and that made me accustomed to it, and my brother was listening to a lot of rock music so I had plenty of influences around me.

Q: Speaking of your family, I believe you are a Suffolk lad, and your tour stops in Newmarket, how do you feel about being back?

I love it man, I love playing Suffolk, we’ve had some great gigs there, I remember playing a show for my solo album at the Ipswich Corn Exchange and that was one of my favourite shows as I used to go there when I was growing up, its always a special moment when you go back to your home town and play a show.

I also love playing in the East Anglia region, so yeah. I actually went to Newmarket as a punter when I was younger. I used to watch the races and stuff so yeah I am looking forward to that I think it will be a really fun show.

Q: I also hear you are an Ipswich Town supporter?

Yeah I support Ipswich, I don’t follow it hugely my brother is actually a much bigger football fan than I am, but I keep an eye on what Ipswich are doing as obviously its my home town I support them yeah.

Q: So do you have a favourite place you like to visit when you come back to Suffolk?

I spent most of my summers growing at Thorpeness on the coast. I’ve got some of my happiest memories at that place. I used to spend three weeks in the summer there and it was just magical. We just used to ride around on our bikes and have so much fun and obviously Woodbridge, where my parents live, is a really special place to me as well.

Q: When was the last time you got Busted and what were you doing?

Q: You have a new album coming out in the Autumn what can we look forward to?

We’re really excited about it, we’ve been out in LA working on it, its very different but I think we’ve written some great songs and I don’t want to give too much away yet, but its going to be exciting for the fans and we cant wait to see the fans reaction to it.

Q: Touching on Newmarket again if anyone is interested in coming to see you what can they expect?

During the tour it will mainly be all of the songs that people will want to hear.  We only have two albums so we’re going to be playing our older material with a few new ones thrown it but yeah, they can expect a high-energy show, and we used to have a lot of fun on the stage so they can expect quite a spectacle.

So there we have it, the men of Busted are back, but they’re taking it one arena tour at a time. They appreciate that the differences that broke them up are, for one thing, now completely understandable. But also, it’s those differences, that volatility, that make their three-way partnership hugely exciting now. Rather than rue them, it’s time to celebrate those varied personalities. Because as the Busted threesome find common ground all over again, the music they make has the potential to be wildly greater than the sum of its parts. So, yes, they’re bristling with song ideas. Yes, they would love to do an album (and studio time is in the offing…). Will they look for a new record deal? Do they need a new record deal? There will be no hurried, panicked decisions. Things were helter-skelter mad enough the last time round – and for sure, they still have ground to make up – that no one’s rushing anything.

GET TICKETS TO SEE BUSTED AT NEWMARKET NIGHTS AT