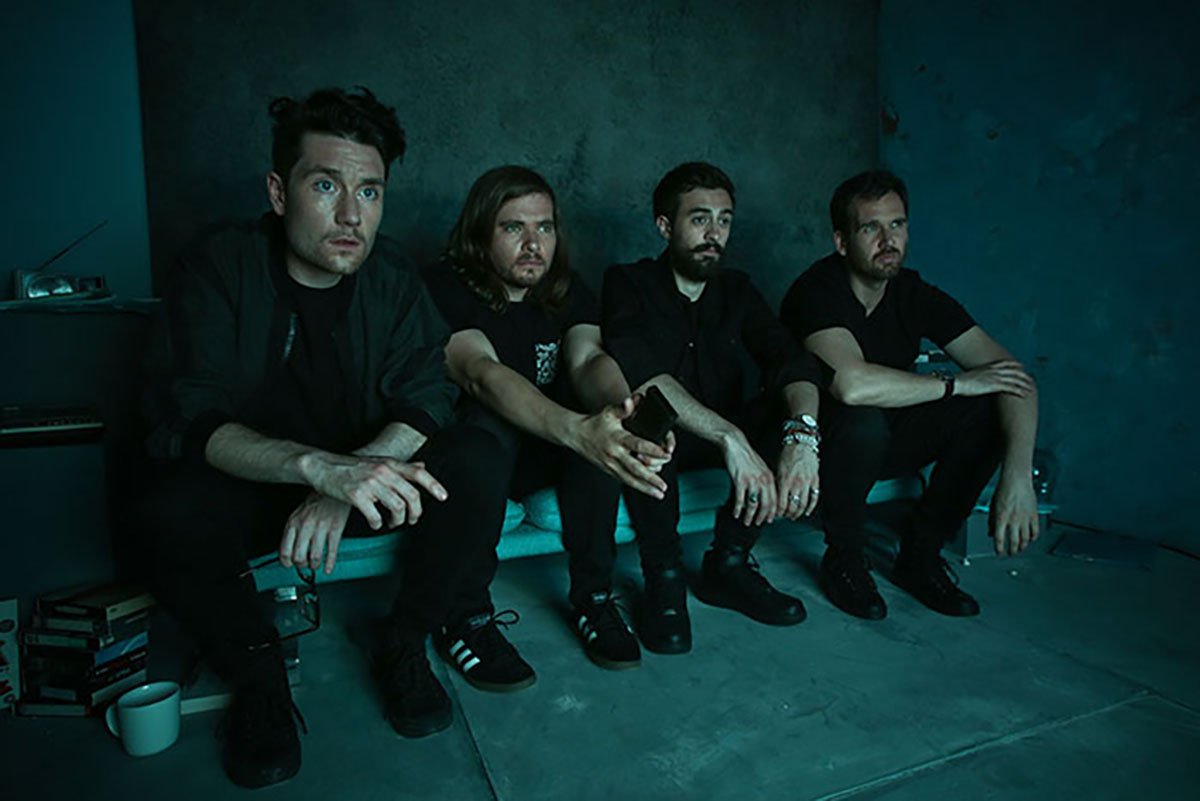 At first glance the striking artwork for Bastille’s hugely anticipated second album, ‘Wild World’, may prompt a number of questions.

Who are the two individuals balanced precariously above a cityscape? Why are they there? What will happen next? But Dan Smith’s own interpretation of the image is one that runs through many of the songs on Wild World,

“To me, the image isn’t about what’s just happened or what happens next,” he begins. “It’s not about how they got there or how they get down. It’s about sharing a moment — two friends existing in that split second in that exact space, two people framed in the vast context of this huge mad metropolis that we’ve all built. They’re there out of choice.”

Bounce Magazine caught up with drummer, Woody, about the new release…

R: Taking you back to 2013, you released your first studio album ‘Bad Blood’ and it entered the UK Albums Chart at number one… How did that feel?

Obviously amazing. It was totally unexpected by everyone, especially us. We never thought we’d get a top 20 let alone a number one.

R: You then went on to be nominated for multiple Brit Awards at the 2014 ceremony, winning the ‘British Breakthrough Act’. How did you cope with having so much success straight away?

We don’t really think about it. Life hasn’t changed drastically as we tour all the time and are always with the same people.

We have had the same crew since the beginning, and being around the same people all the time doesn’t really give you the opportunity to think about how things have change because our day-to-day life remains the same.

R: Now for your early days – how did you first get into music?

My friend’s older brother lent me a bass guitar. I was 13, and he was 18. I wanted to be just like him. He was cool and rode a motorbike and had sex and stuff. I wanted some of that good life, but was too young for motorbikes and sex, so I thought I could emulate him by playing bass.

I would say The Red Hot Chilli peppers, Rage Against the Machine and Greenday. The a little later I got into blues a lot, Hendrix, BB King etc.

R: Do you think that’s influenced your own music style?

On the new album there are defiantly moments when the blues elements are there in the guitar playing. Perhaps the funk Rock/Nu Metal/Punk vibes are a little less obvious.

R: Who is your favourite musician and why?

Hendrix. The coolest and best guitarist of all time. Period.

R: You’ve done many mixtapes in the past, with guest musicians on the tracks – are there any other current artists out there you would like to collaborate with?

Daniel Craig. Some say he is not an artist, and although this maybe true, his torso is most certainly a work of art. I kin to the greatest sculpture of classical Athens or the most transcendent works of the Renaissance.

R: I’ve watched many of your music videos including the most recent one ‘Good Grief.’ They are quite ‘out there’ and very interesting to watch, was this a collective band decision?

Yes. We generally get sent a few ideas and then choose the most interesting. We never want to do a video in which we all just stand around playing our instruments. We always try and do something that at least provokes some sort of response from our fans.

R: Out of all of your own songs, do you have a favourite to perform?

R: Tell us a little bit about ‘Wild World’… what can we expect from the new album?

Hopefully, some new sounds. We use lots of guitar, which is new for us, and also some more electronic sounds and hip hop influences. I think the various influences are perhaps a little more naked on this record. Dan’s vocals and song-writing hopefully tie it all together and maintain the “Bastille sound” whatever that may be.

R: And there is a tour coming up also, will you be playing a mixture of old and new tracks?

Yes. It’s always fun to play new material, however, we understand the a lot of the fans want to hear old favourites.

R: Do you ever get nervous playing live on stage?

Me personally, not that much anymore.  Perhaps when we play very important shows or live TV, then occasionally.

Touring is amazing. Basically my life is one long party/lads holiday. Not really any drawbacks other than I miss my girlfriend. It can be a little tough on the old liver also.

R: What does the rest of the year hold in store for you once your tour is complete at the end of November?

Not sure. I don’t tend to look that far ahead. I know that there is tour in America and Europe early next year. Then we are all over the world up until next summer, leading straight onto festivals. I think we have some time off in 18 months, but I could be wrong!

To support the release Bastille announce the, ‘Wild, Wild World Tour’ taking in fourteen Arenas around the UK throughout October and November. Tickets will be available at: